Windows 10 marketshare just 7.66 percent higher than one year ago

The latest operating system marketshare report from NetMarketShare reveals Microsoft is still struggling to convince people to upgrade to Windows 10. Since its launch on July 29, 2015, the Windows 10 operating system has captured just 26.8 percent of the market.

Over the past year, Windows 10 hasn't seen a lot of growth. It held 19.14 percent of the market in June 2016, which means it captured just 7.66 percent over the next twelve months. Worrying for Microsoft is that people aren't making the transition from Windows 7 to Windows 10. The number of Windows 7 users was 49.05 percent in June 2016, almost exactly the same as this year's 49.04 percent.

Most of Windows 10's growth seems to come from people abandoning Windows XP, and folks updating from Windows 8.1. 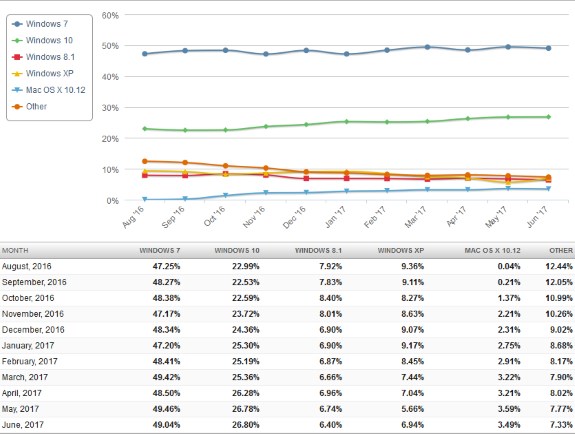