AMD Ryzen Threadripper hits 5.2GHz on LN2 for all 16 cores

Over at the Capsaicin event near SIGGRAPH, AMD let overclockers have some fun with its Ryzen Threadripper 1950X processor.

With LN2 cooling, overclockers like Monstru from Lab501 were able to overclock all 16 cores of the Ryzen Threadripper 1950X to 5.2GHz with a x52 multiplier and standard 100MHz bus speed.

Core VID from CPU-Z is not trustworthy at these temperatures, so presumably it was more in the range of 1.6 V than 1.16 V. They did have DDR4 RAM in quad channel but at the JEDEC base of 2133 MHz to get as high a CPU frequency without the IMC being a factor. The Cinebench R15 score of 4122 cb is very impressive, given the previous high score for a 16-core CPU was 2867 cb, and it took a 28 core CPU to beat this score before. Sure, the days of high core count overclockable CPUs is only coming now but it goes to show where we were before AMD and Intel both decided to go big this generation. 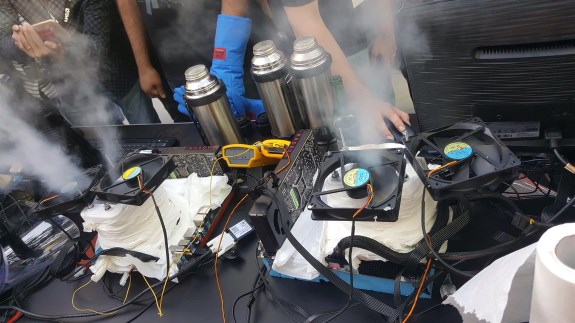 Check out TechPowerUp for more, they also have photos of a bunch of X399 motherboards.