Google working on NERF to replace UEFI and eliminate Intel ME

A couple of days ago, Phoronix reported Google is concerned about the security risks of UEFI as well as Intel's Management Engine.

The search giant is working on Non-Extensible Reduced Firmware (NERF), a project that replaces UEFI with a compact Linux kernel to get rid of all uncontrolled post-boot activity of UEFI. Furthermore, the search giant also wants to limit the Intel Management Engine, to ensure there's nothing running in the background on its servers that it can't check.

NERF delivers "Linux performance and reliability in firmware" as well as eliminates all post-boot activity of UEFI and the Management Engine, rather than allowing it to run concurrently in the background.

Currently the NERF effort is focused on Intel hardware while the Coreboot developers acknowledge the latest AMD chips are closed up too and "Don’t believe all you read about Ryzen."

Ron Minnich and other Google Coreboot developers gave a presentation at Embedded European Linux Conference, you can check it out over here (PDF). In the slide below, Google highlights the issue of the completely proprietary (and exploit-friendly) kernels that are running between Linux and the hardware. 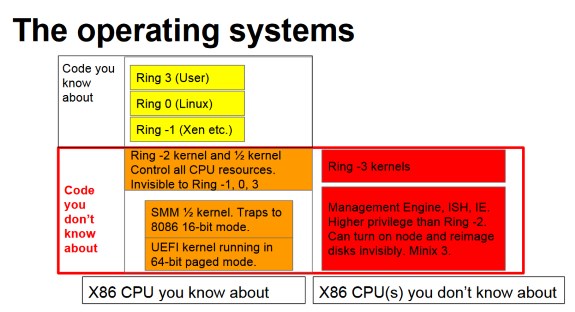 The presentation also stresses that switching to AMD processors is not a solution because the Zen architecture is closed too.