DRAM supply gap may be filled in 2018, cheaper prices expected

Posted on Wednesday, Nov 01 2017 @ 10:59 CET by Thomas De Maesschalck
DRAMeXchange has updated its DRAM market forecast and is optimistic that the tight supply for DRAM may end sooner than previously expected. The pricing of DRAM shot up significantly over the past year and a half due to a major imbalance between supply and demand. Contract pricing of DDR4 4GB modules increased from $13 in Q2 0216 to $30.5 in Q4 2017:

“The average contract price of mainstream 4GB DDR4 PC DRAM modules, for example, has soared from US$13 at the end of second quarter of 2016 to the current US$30.5 in the fourth quarter of 2017,” said Avril Wu, research director of DRAMeXchange. “This represents an increase of 130% over six consecutive quarters.”

Profits of major DRAM suppliers have also expanded significantly on account of the booming market. Currently, the top supplier Samsung has an operating margin of 59%, while operating margins of SK Hynix and Micron are also impressive, respectively at 54% and 44%. The outlook for the fourth quarter of 2017 can be summed up as higher contract prices and higher profits.

Now there's word that Samsung has plans to increase its production, a move that will increase competition. However, the research agency points out the production expansion will also raise a barrier against potential market entrants. A lot of Chinese players want to enter the DRAM market in a big way, and such a move will be hampered if they're under heavy financial pressure. DRAMeXchange believes Samsung's capacity building is mainly about checking the runaway profit growths of its rivals.

With the DRAM market being an oligopoly, the three dominant suppliers theoretically would want to maintain the status quo as to maximize their profits. Nonetheless, SK Hynix and Micron are now flushed with cash after benefitting from several quarters of rising prices, and they are also in a great position to improve their competitiveness. SK Hynix is now transitioning to the 18nm node and will be building its second fab in the Chinese city of Wuxi next year. Meanwhile, with the cash and resources at hand, SK Hynix will be able to proceed with its plans smoothly and on schedule. As for Micron, its rising stock price has given the company an opportunity to pursue capital increase by cash. This signals that Micron is preparing to build new fabs, expand production capacity or upgrade its manufacturing technology. The gains made by SK Hynix and Micron as well as their recent activities are unlikely to have escape Samsung’s notice. Therefore, Samsung may in response expand its DRAM production capacity to main its lead in the market.

Capacity building on the surface is about alleviating the current tight supply situation but the underlying motive behind such a move is to keep prices from going up further. If Samsung chooses this strategy, the short-term effect will be an increase in depreciation cost that will also erode the profitability of its DRAM business. However, Samsung’s ultimate goal to ensure its long-term dominance in the market in terms of having an enormous production capacity and being ahead of its competitors’ technologies by one to two years.

Additionally, China’s memory industry continues to take shape and is expected to enter its formative stage of development in 2018. To forestall Chinese DRAM and NAND Flash makers from catching up significantly, Samsung could raise its production capacities for these products and engage in aggressive pricing. Potential market entrants will not be able to expand their production capacities and improve their technologies on schedule if they are under heavy financial pressure.

This is Samsung only: 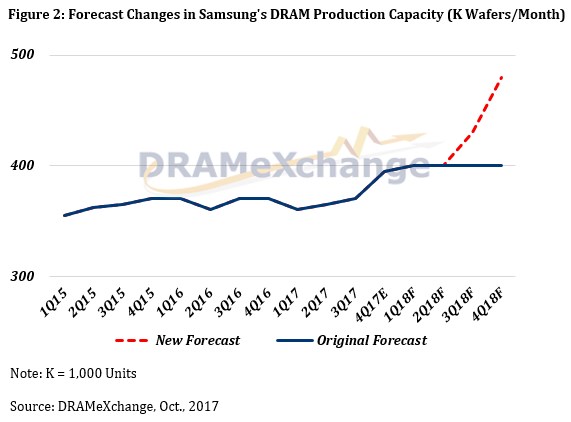 And this is the overall DRAM market. Basically, Samsung is the only firm expected to add capacity in a major way in 2018. 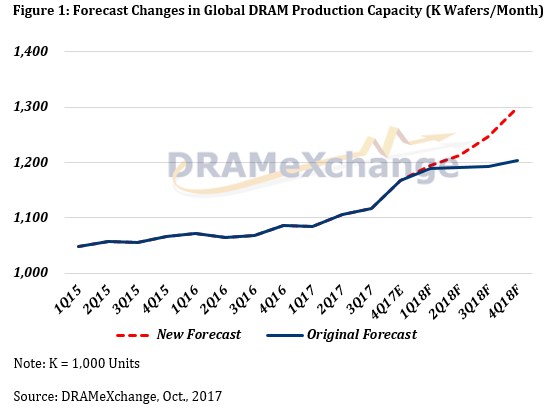 DRAMeXchange projects the annual bit supply growth in the global DRAM market for 2018 could reach 22.5 percent, versus an estimated rate of 19.5 percent for 2017. Furthermore, the researchers also point out that the increased focus on DRAM may result in a milder NAND oversupply situation than previously expected, due to lower investments in NAND memory capacity.