While that doesn't sound like a lot, Power Compare points out that's more than the individual power consumption of 159 countries. If Bitcoin was a country, it would rank 61st in terms of electricity use.

Power Compare also indicates that Bitcoin power usage is growing at an alarming rate. Over the past month alone, Bitcoin miners increased their power consumption by 29.98 percent as the cryptocurrency keeps soaring to new heights.

Interestingly, if Bitcoin power consumption keeps growing at the same rate, it would consume as much electricity as the whole world by February 2020. Of course, the odds of that happening are extremely low. Clearly, something's gotta give as this sort of growth is not sustainable. The big problem here is that a single Bitcoin transaction equals about as much energy as a US household consumes in a week as the process to secure the database is very inefficient.

The huge power consumption of cryptocurrencies like Bitcoin is nothing new but it could be a potential new angle to attack the technology, from an environmental as well as resource management point of view. Cryptocurrencies like Bitcoin are already on track to become a major headache for governments and its inefficiency will probably be one of the talking points to curtail its use. 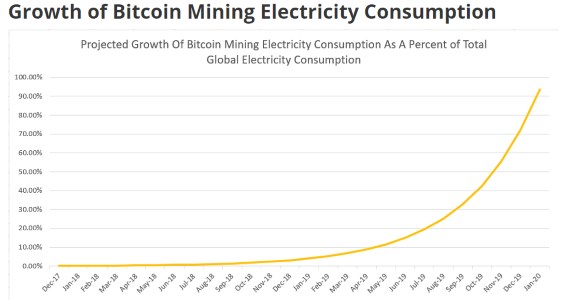 You can check the full report over here.