I've been getting the feeling for some time now that very little rumors about NVIDIA GPUs hit the web these days. It seems as if the company has successfully managed to weed out all the moles that used to spread interesting tidbits about future products. This is evidenced once again today as the company unexpectedly introduces a new flagship product.

Over at the Conference on Neural Information Processing Systems, NVIDIA introduced the TITAN V, a $2,999 video card based on its Volta GPU. Made on the new TSMC 12FFN process, this card features 21.1 billion transistors and comes with 12GB HBM2.

The TITAN V features a massive GV100 GPU with 5120 CUDA cores, it's clocked at 1200MHz and features a 1455MHz Boost clock. The card has a memory bandwidth of 653GB/s, has 110 teraflops of deep learning computing power, and 13.8 teraflops of single-precision compute. The model has a 250W TDP and has a cooler with a golden-colored shroud.

Despite being part of the TITAN series, this card is not aimed at gamers. NVIDIA markets this model towards researchers and scientists. It's basically a cheaper version of the Tesla V100, with an actively-cooled design that fits in regular desktop PCs. However, we still look forward to the first gaming benchmarks of this card, as it will give us an idea of what datacenter-oriented big Volta can do. The card is immediately available via the NVIDIA store. 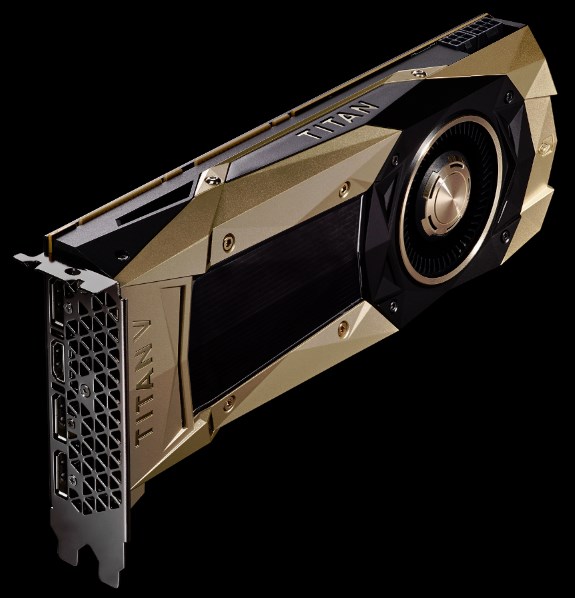 Announced by NVIDIA founder and CEO Jensen Huang at the annual NIPS conference, TITAN V excels at computational processing for scientific simulation. Its 21.1 billion transistors deliver 110 teraflops of raw horsepower, 9x that of its predecessor, and extreme energy efficiency.

“Our vision for Volta was to push the outer limits of high performance computing and AI. We broke new ground with its new processor architecture, instructions, numerical formats, memory architecture and processor links,” said Huang. “With TITAN V, we are putting Volta into the hands of researchers and scientists all over the world. I can’t wait to see their breakthrough discoveries.”

NVIDIA Supercomputing GPU Architecture, Now for the PC
TITAN V’s Volta architecture features a major redesign of the streaming multiprocessor that is at the center of the GPU. It doubles the energy efficiency of the previous generation Pascal™ design, enabling dramatic boosts in performance in the same power envelope.