The new model will be bundled with some of the higher-end Ryzen 2000 series processors. It's nearly the same as last year's Wraith Max, the biggest difference is that it has two Rainbow RGB LED rings:

The cooler features two RGB LED diffusers embedded into its shroud, an outer ring at the mouth of the intake, and an inner ring along the bore of the intake framing the fan. You will be able to control the RGB LED lighting via Ryzen Master software, but it will also support software standards from motherboard vendors, such as ASUS Aura Sync, MSI Mystic Light, GIGABYTE RGB Fusion, BIOSTAR Vivid, etc.

AMD's Wraith Prism will also be sold separately. The MSRP is $49, which is $5 more than the Wraith Max. 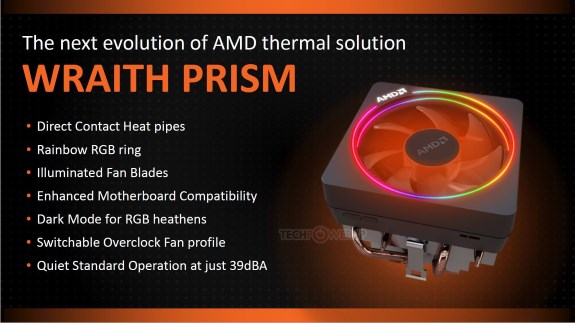