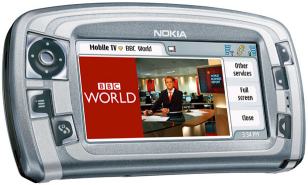 Nokia is presenting a version of its internet cellphone 7710 on the stand that it shares with the Berlin-Potsdam DVB-H pilot project, but this phone cannot be bought anywhere. The prototype has a new back panel which contains the receiver, and this can screen twelve different television channels in such high quality that viewers can easily see the ball in a football match.

“We want to show the consumer what will be possible next year, as well as making use of this fair in order to establish contact with potential partners”, says Kai Froese, Sales Manager Mobile TV for Nokia GmbH. No final decision has yet been made about the appearance of these receiver units, which should be available in time for the football World Cup. And 41 per cent of the 500 people who took part in trials in Finland have declared themselves willing to subscribe to mobile TV services. 58 per cent believe that such facilities would be readily accepted, and half were willing to pay a charge of up to ten euros per month.

Participants in the trials mainly used the mobile services outside normal broadcasting times and the time they spent each day averaged 20 minutes.