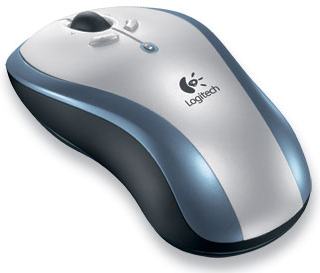 The fourth mouse introduced today be Logitech is the LX7 Cordless Optical Mouse which should deliver a battery life of up to eight months on two AA batteries.

Long battery life and the ability to manage power consumption are important qualities for cordless mice. In fact, a recent survey of 1,200 Logitech mouse owners showed that 76 percent were highly interested in having a battery indicator light on the mouse. The Logitech LX7 Cordless Optical Mouse features Logitech´s new smart power management system, which includes an indicator light that glows green when the mouse is turned on and the battery life is good. The light blinks red when 1-2 weeks of battery life remain. The second component of the smart power management system is an on/off button on the base of the mouse, which can help further extend battery life. The mouse also uses invisible optical tracking technology that conserves power while tracking better than previous optical mice with a red LED. And, it automatically goes into a power-saving standby mode within one second of inactivity.

The Logitech LX7 Cordless Optical Mouse uses Logitech´s proprietary 27 MHz technology and a plug-and-play mini-receiver. The mouse and receiver are paired during manufacturing so that when they are plugged in, they work immediately — making it easy to use with either a notebook or desktop computer. No setup or connection process is necessary. Also, the LX7 doesn´t have a bulky receiver, which was previously common with cordless mice, further decreasing desktop clutter.

The mouse uses two AA batteries, but can operate on only one for those who prefer the mouse to be more lightweight. The mouse includes Logitech´s Tilt Wheel Plus Zoom scroll wheel, which allows people to effortlessly scroll left, right, up and down, and zoom in and out of digital photos, Web pages and open documents. It also features integrated forward and back buttons.