NVIDIA no longer markets its Tegra SoC lineup but development of these cores is still in progress. The ARM-based chips found their way into the company's self-driving car chip lineup, where the Xavier SoC is currently used for the DRIVE Xavier module, as well as the multi-core DRIVE Pegasus module.

Xavier just started sampling to automotive clients and NVIDIA revealed the codename of Xavier's successor at its GPU Technology Conference. AnandTech writes the SoC is codenamed "Orin". It's a single-chip solution, but no in-depth details were revealed at GTC 2018.

Interestingly, NVIDIA claims a couple of Orins will be able to replace a Pegasus module. That would be a massive achievement:

Pegasus, as a reminder, is a pair of Xaviers each with an unnamed, post-Volta discrete GPU attached, with a total power consumption of 500W. So to replace that with a couple of single-chip SoCs would be a significant accomplishment – and presumably a massive bump in energy efficiency. 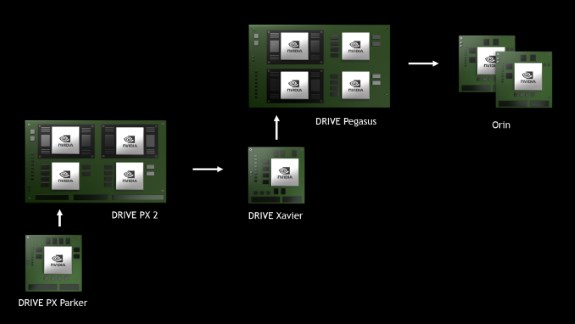