Posted on Friday, Aug 17 2018 @ 13:05 CEST by Thomas De Maesschalck
TrendForce's DRAMeXchange published a new report about the DRAM market. The agency writes Q4 2018 contract prices for DRAM are showing flat to low growth, after having seen nine consecutive quarters of growth. OEMs are reportedly not very active in DRAM purchasing, as they still have a lot of inventory and expect possible price declines in 2019.

DRAMeXchange, a division of TrendForce, reports that DRAM suppliers have in turn begun their 4Q18 contract negotiations with their clients since the mid-August. Looking ahead, DRAMeXchange expects that the quotations of DRAM products have an increasing chance to grow weak in 4Q18, although the industries previously expected a flat price trend. This weak quotation is mainly due to increasing supply yet fairly limited growth in demand.

With regard to the 3Q18 contract prices, PC DRAM and server DRAM products have shown a 1~2% hike QoQ, mobile DRAM and specialty DRAM applications have witnessed a flat price trend, while graphics DRAM has started to experience a price drop. On the other hand, the spot prices have been sliding since the beginning of this year and then dropped to a level lower than contract prices at the end of June, which has become an early indicator of the possible DRAM price decline in general.

Looking ahead to 2019, DRAM companies will continue their migration into the 1X/1Y process, and SK Hynix’s new fab in Wuxi is expected to enter production. Consequently, the bit supply growth in the whole industry will be greater than demand growth, resulting in the overall DRAM price decline at a rate of 15~25% YoY.

PC DRAM and server DRAM quotations expect a flat price trend or marginal decline
PC DRAM contract prices have always been an early indicator of the contract price trend for other DRAM applications. This is because PC DRAM products are highly sensitive to the change in demand and supply situations although the share of PC DRAM in the entire production is less than 15%. In the fourth quarter, which is normally a peak season, PC OEMs are not very active in DRAM purchase, considering their high inventory levels of DRAM and awareness of the possible price decline in 2019. DRAMeXchange believes that the PC DRAM sector will expect a flat price trend in the best case, or experience a marginal decline.

In terms of server DRAM, the undersupply has been eased with significantly improved order fulfillment rates in 3Q18, as the DRAM suppliers continue to increase the proportion of server DRAM applications in their product mixes. However, the market situation in 4Q18 will still depend on the demand from data centers in China and North America. The quotations have a higher possibility to be flat and also a chance to decline.

The tight supply of mobile DRAM has been eased, with a flat price trend or even a decline
In the smartphone market, the demand will be driven by the anticipated launch of new iPhones and Android flagship models. The production volume of smartphones in 4Q18 is expected to grow by 5~10% QoQ, boosting the demand for mobile DRAM. With higher order fulfillment rates in the mobile DRAM market, the overall demand and supply situation in 2H18 will be better than in 1H18, since SK Hynix and Micron have been working to raise the yield rates and to migrate to advanced process, together with the newly added capacity at the Pyeongtaek plant of Samsung. DRAMeXchange expects that there is a chance for flat price growth or even another decline in mobile DRAM contract prices in 4Q18. Specifically, the prices of discrete solutions may be flat or decline by less than 2% QoQ, while eMCP may see a 2%~5% decline QoQ compared with 3Q18 due to the continuous price drop of NAND Flash.

In terms of specialty DRAM, DRAMeXchange notes that the stock-up demand has not been obvious so far despite the coming traditional peak season for consumer electronics in the second half of the year. For instance, set-top box, the second-largest application of specialty DRAM, has experienced a weak demand and a high inventory level as the result. This will in turn affect the stock-up momentum in 2H18 and may lead to a slight decline in the annual sales. Overall speaking, the contract prices of specialty DRAM would remain flat in 3Q18, but the spot prices have started to fall. For 4Q18, there is a higher chance for the contract prices to decrease. Particularly, DDR4 products may see a steeper price drop, with an over 20% price difference with DDR3 products of the same density. 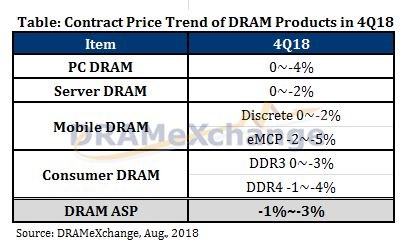