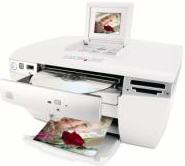 The printer enables you to preview and edit photos on a large 2.4-inch flip-up LCD display and it gives you the option to either burn the photos to a CD-R or print them, without needing to boot-up your computer. It's also possible to print photos from your cell phone by using a Bluetooth adapter.

"The Lexmark P450 brings more photo processing functions to the home. People can now save and organize their digital photos on CD, print from a cell phone, view their photos on a television and much more. The Lexmark P450 is quite intuitive, easy to use and affordably priced," said Najib Bahous, Lexmark vice president and president of its Consumer Printer Division.

Here's a short look at the features of the P450: The printer will be available in October for $199.