Posted on Tuesday, Nov 06 2018 @ 11:59 CET by Thomas De Maesschalck
Last year, the cigar-shaped Oumuamua (1I/2017 U1) made headlines as it was the first interstellar object detected passing through our Solar System. Due to its weird properties, the object received quite a bit of attention. Oumuamua has an extreme aspect ratio of at least 5:1, does not show any comet-like activity, is moving very fast, and is rotating in a tumbling motion. Basically, it's an object unlike any other previously known asteroids and comets in the Solar System.

In a new paper (PDF), researchers from the Harvard Smithsonian Center for Astrophysics take a very technical look at the object and how solar radiation pressure could explain Oumuamua's peculiar acceleration.

The scientists conclude Oumuamua is likely a new class of thin interstellar material, as its mass-to-area ratio is unlike any known Solar System object. Interestingly, the paper suggests objects like Oumuamua could either be produced naturally, through a yet unknown process, or be of an artificial origin.

The implication here is that Oumuamua could be a piece of debris from advanced technological equipment, or perhaps even a probe that was intentionally send to our Solar System. The researchers point out that our own civilization has designed and constructed lightsails with similar dimensions, and suggest it might be abundantly used for transportation of cargos between planets:

In the former case, dynamical ejection from a planetary System could result in space debris of equipment that is not operational any more, and is floating at the characteristic speed of stars relative to each other in the Solar neighborhood. This would account for the various anomalies of ‘Oumuamua, such as the unusual geometry inferred from its lightcurve , its low thermal emission, suggesting high reflectivity , and its deviation from a Keplerian orbit without any sign of a cometary tail or spin-up torques.

A more exotic scenario is that Oumuamua could have been a fully operational, targeted probe:

Alternatively, a more exotic scenario is that ‘Oumuamua may be a fully operational probe sent intentionally to Earth vicinity by an alien civilization. Based on the PAN-STARRS1 survey characteristics, and assuming natural origins following random trajectories, Do et al. (2018) derived that the inter- stellar number density of ‘Oumuamua-like objects should be extremely high, ? 2 × 10^15 pc ?^ 3 , equivalent to ? 10^ 15 ejected planetisimals per star, and a factor of 100 to 10^8 larger than predicted by theoretical models (Moro-Martin et al. 2009). This discrepancy is readily solved if ‘Oumuamua does not follow a random trajectory but is rather a targeted probe. In- terestingly, ‘Oumuamua’s entry velocity is found to be ex- tremely close to the velocity of the Local Standard of Rest, in a kinematic region that is occupied by less than 1 to 500 stars (Mamajek 2017).

Unfortunately, it's no longer possible to study Oumuamua with existing telescopes. The scientists put forward that the Large Synoptic Survey Telescope, which should be operational within a couple of years, will be helpful in performing deep wide-area surveys to detect similar objects. 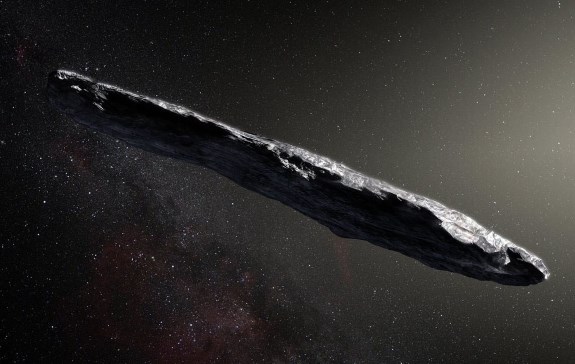