The other big news from the AMD Next Horizon event involved the upcoming 7nm Zen 2 based processors. The event focused on the "Rome" EPYC server processors, which are currently sampling with customers. Made on a 7nm process by TSMC, Rome is a multi-chip module that features four to eight CPU dies, with a central 14nm I/O die that handles memory and PCI Express, all linked via InfinityFabric.

The platform will include chips with up to 64 Zen 2 cores, support for 96-lane PCI Express 4.0, and 8-channel DDR4 memory. Other than this, Zen 2 promises an enhanced execution pipeline, an improved branch predictor, better instruction pre-fetching, a re-optimized instruction cache, larger op cache, and floating point enhancements.

AMD didn't reveal how much the IPC has been improved, but word on the street is that you can expect an uplift of up to 15 percent. Combine this with more cores, higher clockspeeds, and better energy efficiency, and you're looking at a mighty rival versus Intel's Xeon lineup. 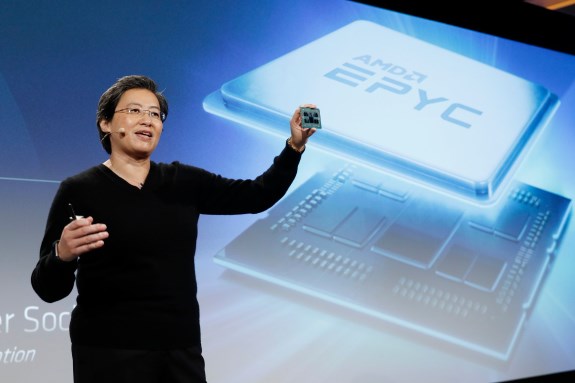 “The multi-year investments we have made in our datacenter hardware and software roadmaps are driving growing adoption of our CPUs and GPUs across cloud, enterprise and HPC customers,” said Dr. Lisa Su, president and CEO, AMD. “We are well positioned to accelerate our momentum as we introduce the industry’s broadest, most powerful portfolio of datacenter CPUs and GPUs featuring industry-leading 7nm process technology over the coming quarters.”

AMD Compute Architecture Updates
AMD for the first time detailed its upcoming “Zen 2” high-performance x86 CPU processor core that is the result of a revolutionary modular design methodology. This modular system design uses an enhanced version of AMD Infinity Fabric interconnect to link separate pieces of silicon (“chiplets”) within a single processor package. The multi-chip processor uses 7nm process technology for the “Zen 2” CPU cores that benefit from the advanced process technology, while leveraging a mature 14nm process technology for the input/output portion of the chip. The result is much higher performance – more CPU cores at the same power, and more cost-effective manufacture than traditional monolithic chip designs.