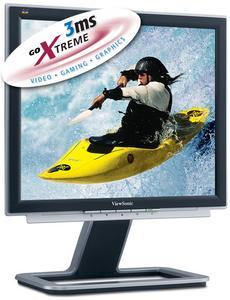 Although initially released with the conservative 4ms response time specification, further comprehensive testing proved the VX Series' response time to be even faster. The Xtreme LCD line provides average gray-to-gray (or intermediate level) response time performance of 3ms, which is up to 10 times faster than typical "fast-response" displays on the market. This dramatically lessens motion artifacts and ghosting, making them ideal for extreme gaming, viewing DVDs, watching television, and traditional computer applications.

The VX924 and VX724 are the first desktop displays to combine ViewSonic's proprietary Dynamic Structure and Amplified Impulse video response acceleration technologies to support rates of more than 300 frames per second across the entire color scale. This advancement produces superior front-of-screen performance for motion video, since the majority of video transitions on games and digital entertainment occur within these intermediate ranges.

The displays are immediately available.