Posted on Tuesday, Nov 27 2018 @ 22:49 CET by Thomas De Maesschalck
If you're looking for an affordable case with a tempered glass side panel and RGB LED lighting, Sharkoon has two new options in its portfolio:

Sharkoon Technologies is an international supplier of PC components and peripherals which boast performance at a reasonable price. Sharkoon now presents the TG4, a more compact case version of the TG5. In addition, the manufacturer has added an RGB lit midi tower with addressable fans to its SKILLER SGC1 series. The latter model now also features a tempered glass side panel instead of acrylic. The TG4 is also comes with addressable RGB fans, but models are also available with single color fans.

Sharkoon TG4: Compact Case for Price-Conscious Gamers
The Sharkoon TG4 is more compact than the highly acclaimed and proven TG5. When developing this ATX midi tower, the focus was on a compact format with small dimensions, so unnecessary features such as mounting bays for optical drives were deliberately avoided. However, there are no major limitations to the hardware which can be used: When it comes to mainboards, mini-ITX and (micro-)ATX models can be easily mounted. The graphics card and the power supply unit can be a maximum of 37.5 and 26.5 centimeters respectively. The CPU cooler should not exceed a height of 16 centimeters. There is also room for two 3.5 inch and four 2.5 inch drives. This makes the TG4 ideal for air-cooled systems.

Modern Optics Thanks to Glass and RGB
Just like its predecessor, the TG4 has a tempered glass front and side panel, which not only provides an elegant design, but also provides a generous view of the components. The TG4 is also equipped with four pre-installed and illuminated 120 millimeter fans. Three of them are located in the front and one in the rear, which guarantees an efficient air flow.

For the lighting, the buyer has a choice of three variants, either with red, blue or RGB illuminated fans. The latter are addressable models that can be connected to an integrated 4-port RGB controller. This controller can be connected to a 3-pin connector for addressable RGB LEDs on the mainboard so that colors and effects can synchronize with the other components. Alternatively, the lighting can also be controlled manually. In this mode, 14 lighting effects are available, which can be switched through via the reset button on the case. The illumination can also be completely deactivated.

Sharkoon SKILLER SGC1 RGB Completes the Product Range
With the Sharkoon SKILLER SGC1 RGB, the manufacturer has added a version with two addressable 120 millimeter RGB LED fans and a side panel made of tempered glass to its range of cases of the same name. The models currently available are equipped with single-color fans and an acrylic side window. The new version also has a 4-port RGB controller that can be connected to the mainboard to synchronize the lighting effects with the rest of the hardware. Like the TG4, it is also possible to select the 14 lighting effects via the reset button or to switch off the illumination completely.

The Usual Wide Range of Features
Otherwise, the virtues of the SKILLER SGC1 series are of course retained. This also includes the numerous installation options: for example, mounting mainboards in mini-ITX, micro-ATX and ATX standards is no problem. It is also possible to integrate CPU coolers up to a height of 15.3 centimeters as well as graphics cards with a length of 40 centimeters and power supply units with a length of 24 centimeters. In addition, two 5.25 inch installation bays are available in which, for example, optical drives can be tool-free installed. Alternatively, 3.5 inch hard drives can also be installed. But if more space is needed, the bays can also be completely dismantled.

In the underside of the case there is a tunnel that covers the power supply and the hard drive cage, thus ensuring a tidy appearance. The cage can be moved to a certain extent and it allows the installation of two HDDs. The hard drives are decoupled from the cage by suitable rubber coatings. Sharkoon has put a cut out in the cover towards the front in order to create space for the installation of water cooling radiators; and thanks to practical extra-long slots, different sizes can be flexibly installed in the bottom and the top of the case. Numerous cable pass-throughs also allow the cables to be laid neatly. In addition, the interior is protected by removable dust filters on the front, top and bottom. 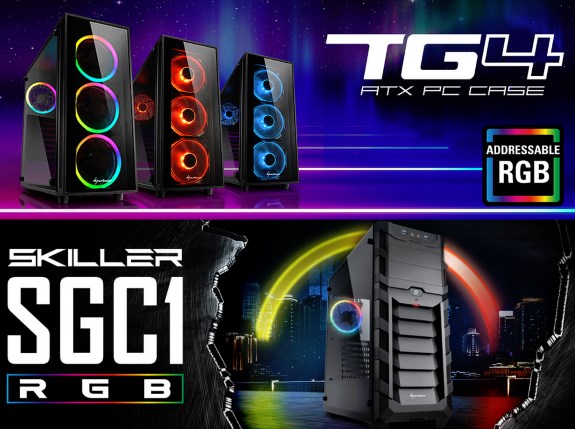