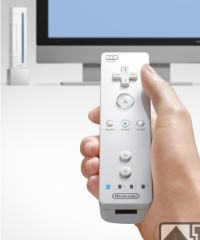 Here's a look at the controller of Nintendo's next-generation console, the Revolution.

The controller for Nintendo's upcoming Revolution home console system is a cordless remote-control-like device designed to be used with only one hand. Two small sensors placed near the TV and a chip inside the controller track its position and orientation, allowing the player to manipulate the action on screen by physically moving the controller itself. For example, you could slash an in-game sword by actually swinging the controller from side to side, turn a race car just by twisting your wrist, or aim your gun in a shooter by pointing the controller where you want to fire.

Check out 1UP for more details and photos.