Posted on Thursday, May 23 2019 @ 11:25 CEST by Thomas De Maesschalck
When you first start shopping for projectors, it’s easy to think that all projectors are created equal. Then you start digging into things and notice that there are some drastic and noticeable differences. For example, you can choose between a short throw and a long throw projector. What is the difference? Let’s see in the guide below. 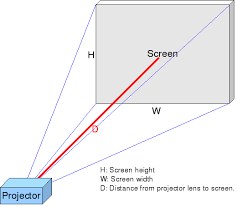 The Difference between Short Throw and Long Throw Projectors

Long Throw Projectors
A long throw projector is going to need six feet or more of available space from where you place the projector to where the screen is in order to create a 100 inch screen size. There are a number of benefits to longer lenses. The first benefit we have already discussed, which is the relatively inexpensive price. The second benefit is how well they work in large spaces, like an exhibition, a house of worship, or an outdoor theater. If your home has a large room, a long throw projector will make for an amazing home theater. Long throw projectors are not that great if you are in a small room. The closer you bring the projector to the wall, the more the projected image shrinks.

Ultra Short Throw Projectors
These are another level of projector. They are able to create images of up to 100 inches while being only 15 inches away from the projected surface. Because of their expense, ultra short throw projectors are most commonly used in commercial enterprises. If you can afford one, they are useful in small homes or apartments.

Which Option Is Right for You?
In order to answer this question, you have to look at your priorities. If your primary priority is price, then a long throw projector may be the right option for you. Of course, the long throw projector is not going to produce good results in a smaller environment. One of the biggest complaints that people have about long throw projectors is how easy it is for someone to walk in front of the projector’s light and ruin the show for everyone.

Additional Options to Consider
Once you determine the throw distance for your projector, you can look at some of the other options it offers. For example, you want to make sure that the projector you are using has the inputs so that you can connect your projector to things like your computer, your Blu-ray player, your video game console, or any audio equipment you may use.

If you are looking at a long throw projector, it’s likely that you are going to want to mount it on the ceiling. Do not take it for granted that all projectors can be mounted this way. And even if the projector you are considering has been designed to be mounted on the ceiling, it may not have the accessories needed to accomplish this task. So make sure that you check and double check what you are getting.

Projectors come with different forms of projection. Options include LCD, DLP, and LED. The option you choose will determine the brightness as well as the brilliance of the colors of the projector. Are you looking for a projector that can connect to your smart device or work with automation? Make sure the projector you select has these options available.

As with all things connected to technology, the price of projectors is consistently falling. This means that you can reasonably afford a projector of a higher quality than you could have afforded a few years ago. Take your time, and do your due diligence. You will be able to find the projector that is right for you.

As always, we appreciate hearing from you. What do you think of our review? Are you using a short throw, ultra short throw, or a long throw projector? If so, let us know about your experience in the comments section below.