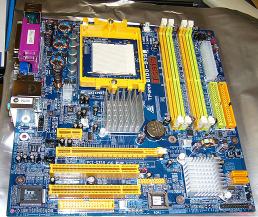 It looks like the rumours are true, NVIDIA's C51 chipset with integrated graphics will be called TForce. It looks like their are at least two versions. There's the TForce 6100 with the NVIDIA GeForce 6100 northbridge and NVIDIA nForce 410 southbridge, while there's also the TForce 6150 which features the GeForce 6150 northbridge and the nForce 430 southbridge.

The Japanese guys from Akiba managed to spot these motherboards based on NVIDIA's TForce6100 in a Japanese store. More photos and specification sheets can be seen at Watch Impress Akiba.