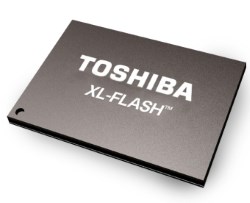 Toshiba announced mass production of its XL-Flash memory will begin in 2020. This is a new BiCS Flash 3D flash memory technology with 1-bit-per-cell SLC, it offers low latency and aims to take on the 3D XPoint technology that was developed by Intel and Micron. The XL-Flash offers a read latency of under 5 microseconds, which is ten times faster than existing TLC NAND flash memory.

Classified as SCM (or persistent memory), with the ability to retain its contents like NAND flash memory, XL-FLASH bridges the performance gap that exists between DRAM and NAND. While volatile memory solutions such as DRAM provide the access speed needed by demanding applications, that performance comes at a high cost. As the cost-per-bit and scalability of DRAM levels off, this new SCM (or persistent memory) layer in the memory hierarchy addresses that issue with a high density, cost effective, non-volatile NAND flash memory solution. Poised for growth, industry analyst firm IDC estimates the SCM market is expected to reach in excess of $3B in 2022.

Sitting in between DRAM and NAND flash, XL-FLASH brings increased speed, reduced latency and higher storage capacities – at a lower cost than traditional DRAM. XL-FLASH will initially be deployed in an SSD format but could be expanded to memory channel attached devices that sit on the DRAM bus, such as future industry standard non-volatile dual in-line memory modules (NVDIMMs).