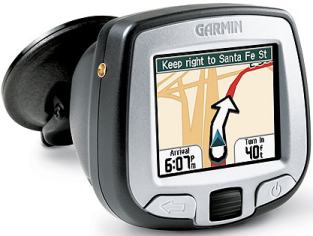 Garmin expanded its innovative StreetPilot i-series product line with the introduction of the StreetPilot i5. The i5 offers customers the lowest priced GPS navigator that is pre- loaded with detailed maps of North America which includes the entire United States, Canada, and Puerto Rico.

The StreetPilot i5 features three buttons on the face of the unit: on/off button, "back" button, and a unique and convenient click-to-enter scroll wheel -- which makes it easy to select a destination from the unit's menu-driven interface. It provides voice prompted, turn-by-turn directions through a built-in speaker, and the unit easily moves from vehicle to vehicle with an integrated suction cup mount. If a driver misses a turn, the i5 will automatically suggest an alternate route so they can quickly get back on course.

Even though it is the lowest priced unit with pre-loaded maps on today's market, the StreetPilot i5 continues to provide users with some of the same features found on premium navigational units. Consumers may view detailed maps as either three-dimensional, or the more traditional "bird's eye" overhead view. The 3D navigation perspective lets drivers see an uncluttered view of what's down the road.

Key specifications of the StreetPilot i5 include: The StreetPilot i5 is expected to be available in October 2005 and will have an estimated retail price of $499. The unit ships standard with PC/USB cable, 12-volt adapter cable, vehicle suction cup mount, dashboard adhesive disk, and setup guide.