Posted on Thursday, Aug 29 2019 @ 13:02 CEST by Thomas De Maesschalck
GIMP (GNU Image Manipulation Program) has been around for over two decades, it's one of the best free alternatives to Adobe's Photoshop. But apparently, a lot of people believe the name "GIMP" is offensive and prevents more widespread adoption of the tool. As such, a couple of developers have decided to create a new fork called "Glimpse":

The new fork springs from a discussion on Gitlab, where the source code is hosted. The discussion has been hidden but is available on web archives here. A topic titled "Consider renaming GIMP to a less offensive name," opened by developer Christopher Davis, stated:

I'd like to propose renaming GIMP, due to the baggage behind the name. The most modern and often used version of the word "gimp" is an ableist insult. This is also the colloquial usage of the word. In addition to the pain of the definition, there's also the marketability issue. Acronyms are difficult to remember, and they end up pronounced instead of read as their parts. "GIMP" does not give a hint towards the function of the app, and it's hard to market something that's either used as an insult or a sex reference.

More details at The Register.

The official position from GIMP can be found in the FAQ, as this is a question that's been going around for a long time:

"I don't like the name GIMP. Will you change it?"

With all due respect, no. We’ve been using the name GIMP for more than 20 years and it's widely known … on top of that, we feel that in the long run, sterilization of language will do more harm than good. … Finally, if you still have strong feelings about the name "GIMP", you should feel free to promote the use of the long form GNU Image Manipulation Program or maintain your own releases of the software under a different name. 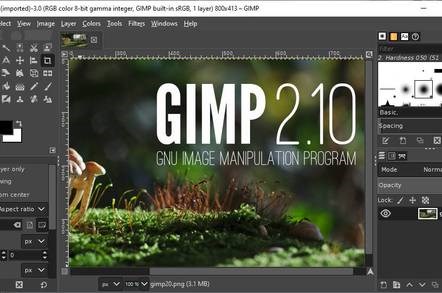