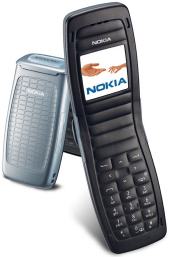 Expanding its wide range of elegant and affordable phones for consumers in emerging markets, Nokia today unveiled the Nokia 2652 phone. The stylish and functional Nokia 2652 fold model builds on the success of the award-winning Nokia 2650, adding two new design motifs, 'Cell' and 'Fleur' with dark gray and pearl white key mats for consumers to choose from. It is expected to be commercially available in October 2005 with an estimated retail price of 100 EUR before subsidies or taxes. The Nokia 2652 will be available in Europe, Middle East, Africa and the Greater China region.

Mobile subscriptions hit 2 billion
While the global mobile subscription base has now reached the significant milestone of two billion mobile subscriptions worldwide, Nokia sees plenty of untapped opportunities and is committed to drive growth in new growth markets, like Brazil, Russia, India, China and countries in Africa. In these markets, affordability of mobile communications for subscribers is the key factor.

"We are working with operators to offer affordable phones and solutions that reduce the total cost of ownership of the handset and mobile services," says Kai Öistämö, Senior Vice President, Mobile Phones, Nokia. "Nokia was the first vendor to focus on an extensive range of products and network solutions in fast growing markets, and we remain committed to introducing affordable, attractive phones with well-considered features and innovative network solutions to meet the communication needs of consumers in these markets."

"It is equally important for us to work closely with government bodies to overcome possible barriers that are preventing forward momentum. With the right combination of mobile phones, network solutions, services and a regulated environment, we envision a mobile landscape where operators can profitably offer mobile services to a broader range of consumers for as little as USD 5 per month. When the cost of mobile services becomes this affordable, we foresee the growth curve in growth markets accelerating sharply," adds Öistämö.

Nokia sells one billionth mobile phone
"The continued rapid growth in mobile subscriptions has exceeded even the mobile industry's own estimates. Since the early 1990's we have seen voice go truly wireless and mobile phones evolve from voice centric to feature driven devices. Earlier this summer, Nokia sold our one billionth mobile phone - a Nokia 1100 sold in Nigeria," says Öistämö. "It will be new growth markets like Nigeria that will fuel the growth towards three billion subscribers by 2010."

Nokia Facts / "Did you know?"
- Since Mobira Senator car phone introduction in 1982 to the Nokia 2652 introduction today, Nokia has introduced around 400 phone models to all major analogue and digital standards.

- Nokia's first iconic product, the Nokia 2100 series that was introduced in 1994, sold nearly 20 million units in its time.

- Nokia consumes 100 billion components on annual level. On average, one phone includes up to 400 components.