Speaking at the UBS Global Tech Conference, AMD shared its confidence that it can get back to historical marketshare levels in both the desktop and server CPU markets. Intel has been lagging for years as the company struggled hugely to get 10nm out of the door and at the same time the Zen-based CPU architectures from AMD were better than people had hoped.

AMD currently has about 7 percent of the server market, which is a lot more than it held a couple of years ago, but it's still far below the 26 percent it once held during the Opteron heydays. The current goal for AMD is to hit 10 percent by Q2 2020.

So the goal is set for near-term and considering the kind of traction that 2nd Gen EPYC has been getting as of late, the goal doesn't sound that hard for AMD to hit. There have also been reports that AMD could hit that goal even before Q2 2020 which has to do with the fact that their main competitor is having significant issues with their 14nm node that delayed orders could lead enterprise users to switch over to AMD's more robust and future proof EPYC platform. 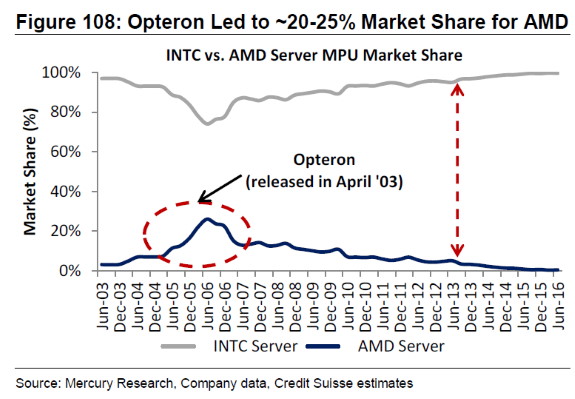 AMD SVP of Worldwide Marketing, Ruth Cotter, mentioned that AMD held about 25 percent of the desktop market during the good old days. The company is currently around 18 percent and rising. More at WCCF Tech