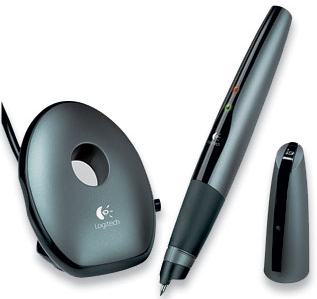 Logitech announced that it's easier and more efficient than ever to turn handwritten notes into action. The company unveiled the new Logitech ioTags feature, part of a software update to the Logitech io2 Digital Writing System, which allows people to use basic handwritten symbols to identify tasks, calendar entries and e-mail as they take notes with digital pen and paper during a meeting. When they return to their desk and dock the pen, the marked portions of the notes are automatically converted to text and imported into Microsoft Outlook or Lotus Notes.

"We all sit in meetings, often taking several pages worth of notes, and writing down action items that may get lost in the daily shuffle -- or, at the very least, need to be typed into a computer," said Chris Bull, general manager for the digital writing group at Logitech. "With ioTags, people can very simply identify different portions of notes to be put into their to-do list, calendar, or even an e-mail. When they get back to the PC, it all just happens automatically -- their handwritten meeting notes are instantly synchronized with their productivity applications."

The Logitech ioTags feature gives io2 Digital Pen users the freedom to define where different portions of their notes will be sent when the pen is docked. To designate an ioTag action while taking notes, a person simply draws the symbol for the type of note to be created; the symbol is always a predefined uppercase letter within a circle. For example, the letter T with a circle around it denotes a new task. Next to the symbol, the person writes out header information for that task, such as a title and completion date. The lines following the header appear in the body of the task. By simply drawing a vertical line from the symbol down to the end the section, the user can indicate the length of the notes to be included with the task. When the pen is docked, a new task window opens in Microsoft Outlook or Lotus Notes and automatically becomes populated with the converted text. The user then edits the task or saves and closes it. The ioTags software works with current versions of Microsoft Outlook including versions 2000, 2002 and 2003. It also works with Lotus Notes beginning with version 5.0.

Within the Logitech io2 software settings, users can create new ioTags for a wide variety of functions within the Logitech io2 software. One could, for example, set up an ioTag to indicate that a block of text should be sent directly into Microsoft(R) Word(R) software, or a drawing should be automatically converted into a jpeg file. While ioTags automatically converts handwriting to text, the entire content of the original handwritten notes will be uploaded and stored as a digital pen file.