Posted on Tuesday, Feb 04 2020 @ 18:41 CET by Thomas De Maesschalck
Polish case maker SilentiumPC introduces the Regnum RG6V TG and RG6V EVO TG ARGB cases. These modules are offered for 56EUR and 69EUR, respectively. As the naming suggests, the difference between the two cases is that the former has four 120mm fans, while the latter has four Stella HP ARGB CF 120mm case fans. 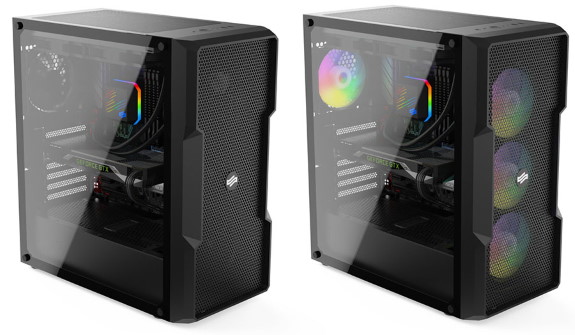 The European manufacturer of CPU coolers and PC cases, SilentiumPC, expands its Regnum case series with two magnificently equipped and airflow-oriented midi towers. The Regnum RG6V TG offers many sophisticated features and makes the most of every centimeter of space. Thanks to the four pre-assembled Sigma HP 120 mm fans, in combination with the large mesh front, an exceptionally good air flow is guaranteed right out of the box. The Regnum RG6V EVO TG ARGB on the other hand, comes with four Stella HP ARGB CF 120 mm case fans, offering "state of the art" ARGB lighting.

Natissis: Perfected Internal Structure
SilentiumPC's development team has perfected the two-chamber structure and the internal layout, in order to achieve further differentiation from the competition. The inner structure, called Natissis, gives the two Regnum RG6V TG models outstanding flexibility, especially when it comes to selecting components for high-performance systems. Mainboards in the formats E-ATX, ATX, Micro-ATX and Mini-ITX can be easily installed and combined with graphics cards with a length of up to 360 mm. When choosing the CPU cooler, air coolers with a height of 162 mm or AIO water cooler systems with radiator sizes from 120 to 360 can be fitted. Radiators can be mounted at one of four different positions in the housing depending on the size.

Sophisticated Cable Management
Thanks to the sophisticated Natisis internal structure, the routing of the many cables inside the PC case is very easy and comfortable. On the back of the mainboard tray three long cable clips and no less than 24 fixtures for fastening cable ties are implemented. In addition to that, seven rubber grommets are added for cable routing inside the case for more convenient and tidy cable management.

Outstanding Cooling Out of The Box
A total of four Sigma HP 120 mm fans ensure an superb air flow inside the chassis. Three fans are located in the front and one on the back. This design ensures optimal air circulation and supports effective cooling of the components. The pre-installed Sigma PRO 120 mm case fans can all be connected to the mainboard via just one fan connector using the integrated splitter. All air inlets are also equipped with dust filters.

Not only the front is designed for good airflow. The dividing wall in the lower part of the case is covered with a wide mesh structure, as is the large inlet in the top panel. Furthermore, a nice honeycomb-shaped hole grid is punched out in the mainboard tray, improving the aesthetics and benefiting the cooling of 2,5” drives.

Both models are delivered with a tempered glass side window, which brings the installed components further into focus and makes them easily visible. In the front of the top panel there is a well-equipped I/O panel, which includes the power and reset button, two USB 3.2 Gen 1 ports and the jack for microphone and audio.

The SilentiumPC Regnum RG6V TG and the Regnum RG6V EVO TG ARGB are available as of today.