The European manufacturer of CPU coolers and PC cases, SilentiumPC, inspires fans of CPU coolers with unique looks by introducing the Fortis 3 EVO ARGB. The new model is able to combine the usual quality features of the Fortis CPU cooler series with a striking eye-catcher design. The fully nickel-plated heat-sink of the tower cooler fits perfectly with the fully illuminated 140 mm fan, resulting in a very stylish overall appearance. The bundled fan is the new Pulsar HP ARGB 140 mm SE PWM model, which is made of a milky polymer material and can therefore be illuminated entirely by the addressable RGB LEDs. The asymmetrically designed tower cooler ensures maximum compatibility and great cooling capacity at a competitive price.

Unique Design with ARGB Lighting
The brand new Pulsar HP ARGB 140 mm SE fan gives the Fortis 3 EVO ARGB a distinctive overall appearance and allows phenomenal lighting effects at the same time. The nine addressable RGB LEDs shine smoothly through the milky polymer material of the fan and radiate in all imaginable colors. For convenient fan speed control, the 140 mm fan can be easily regulated in the speed range of 250 and 1,400 rpm via the PWM controller of the mainboard. Thanks to the standardized 3-pin ARGB connector used here, users are able to choose from several options for adjusting the colors and effects of the lighting. This can be done either by connecting it to a corresponding socket on compatible motherboards, or by using the included Nano Reset ARGB controller, or the Aurora Sync PWM EVO Controller which is available separately. Supported motherboard systems include Asus™ Aura, ASRock™ Polychrome Sync, MSI™ Mystic Light and Gigabyte™ RGB Fusion.

High Performance Tower Cooler
The Fortis 3 EVO ARGB is one of the high-end models in the SilentiumPC's CPU Cooler line-up, which makes this model particularly suitable for processors with high thermal dissipation and thus offers plenty of reserves for modern PC systems. The whole tower is manufactured in high quality and is nickel plated up to the black top plate. The five 6 mm copper heatpipes, which form a major part of the base-plate contact surface area, efficiently conduct the generated heat to the aluminum fins. This enables the tower cooler to effectively cool modern high-end processors.

Asymmetrical Design
Compatibility to RAM with high heatsink has also been considered, when designing the Fortis 3 EVO ARGB. For this purpose the whole heat-sink is laterally offset and thus creates sufficient space to the RAM slots. In addition, the Fortis 3 EVO ARGB is limited in its height to 158 mm, in order to assure it easily fits into most PC cases.

In addition to Nano Reset ARGB controller and the mounting clips, the scope of delivery also includes the powerful Pactum PT-2 thermal paste. 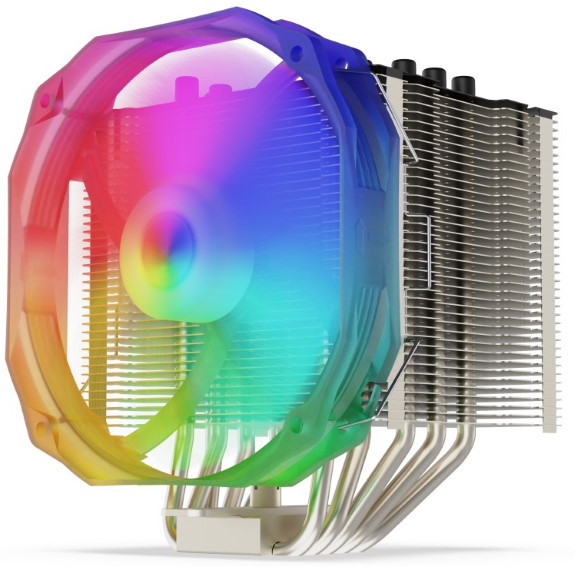