WikiChip goes in-depth about the latest process node details that were recently revealed by TSMC, you can read the full piece over here. The Taiwanese foundry revealed that its N5 process will offer 1.84x greater transistor density than N7.

TSMC execution has been remarkable the last couple of nodes. Since their 16 nm node, each process node has been ramping quicker than its predecessor. N7 was the company’s quickest-ramping node with fastest defect density reduction ever. TSMC says it expects its N5 node to ramp even quicker. 5-nanometer entered risk production in March 2019. The process is expected to ramp in Q2 this year – likely in April or May. When ramped, this will be the densest process in terms of both transistor density and SRAM density – leapfrogging both Samsung and Intel. Samsung 5-nanometer is only slightly denser than their 7-nanometer and is not competitive with TSMC 5 nm. Samsung’s next big jump is their 3-nanometer node. Intel will likely capture the density lead with their 7-nanometer node, however, that node isn’t coming until late next year – a solid 1.5 years behind. 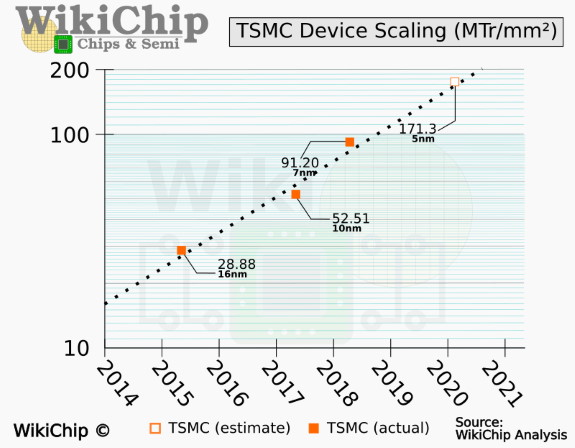