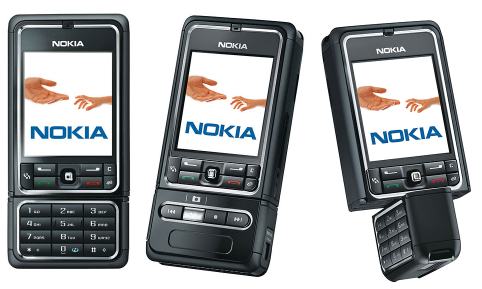 A couple of hours ago I already posted a short scoop on this phone and now Nokia officially announced the Nokia 3250. Many people already drooled over the Nokia N91 and it looks like the 3250 will be the 'budget' version of the N91.

This phone is equipped with a 2 megapixel digital camera and has 1GB storage capacity (enough for up to 750 songs). The phone supports MP3, WMA, M4A and AAC sound and makes it easy to load and transfer music. Additionally, songs can be downloaded over-the-air while on the go and favourite songs can be set as ringtones. The Nokia 3250 supports microSD memory cards of up to 1 Gigabyte with storage capacity for up to 750 songs. An FM radio with Visual Radio client complements the Nokia 3250's complete music package.

By twisting the Nokia 3250 keypad 180 degrees, consumers can toggle between the music controls and the traditional phone keypad, like you can see on the photo.

Using the Nokia Audio Manager software, users can convert their favourite CDs into digital music files, and "drag and drop" their personal music collections and favorite playlists directly from their computer. Headphones can be connected to the Nokia 3250 via the 3.5mm connector of the Nokia Stereo Headset-HS-20, making the list of available enhancements even longer. For the best audio experience, Nokia is working to ensure that the Nokia 3250 is compatible with a number of accessories from industry leading brands such as Bose, Harman Kardon, JBL and Sennheiser.

The Nokia 3250 comes with a two-megapixel camera, which is activated in the landscape mode by twisting the Nokia 3250's phone's keypad 90 degrees. With a few simple strokes, images can be instantly shared with others via MMS, or printed on a compatible printer via Bluetooth wireless technology.

The Nokia 3250 is based on the Series 60 platform and Symbian OS, offering a broad set of features and messaging functionalities and enabling third-party application developers to create their own music applications. Those applications can be downloaded and installed on the Nokia 3250. Bridging smartphone capabilities with music on the go, the Nokia 3250 has a talktime of up to 3 hours.