First top 10 supercomputer with AMD Zen is located at NVIDIA

AnandTech reports the first top 10 supercomputer with AMD's EPYC server processors is used by NVIDIA! The site writes NVIDIA's Selene supercomputer uses the AMD EPYC 7742 64-core 2.25GHz processor in combination with the NVIDIA A100 accelerators. In total, the system features 280 EPYC processors and 1,120 A100 GPUs, which results in a combined total of 277,760 "cores" to offer a combined computing power peak of 27.6 petaflops.

Selene scores a performance of 27.6 PetaFLOPs of FP64 throughput, for 1.3 MegaWatts of power. Compared to the previous Titan supercomputer, which had Opterons and K20x accelerators, that’s 57% more performance for only 16% of the power, making it almost 10x more efficient. Selene uses NVIDIA’s Mellanox HDR Infiniband for connectivity, and has 560 TiB of memory installed.

The supercomputer is used internally by NVIDIA. Quite interesting to see it hit such a high rank with a mere 280 CPUs and 1,1120 GPUs. 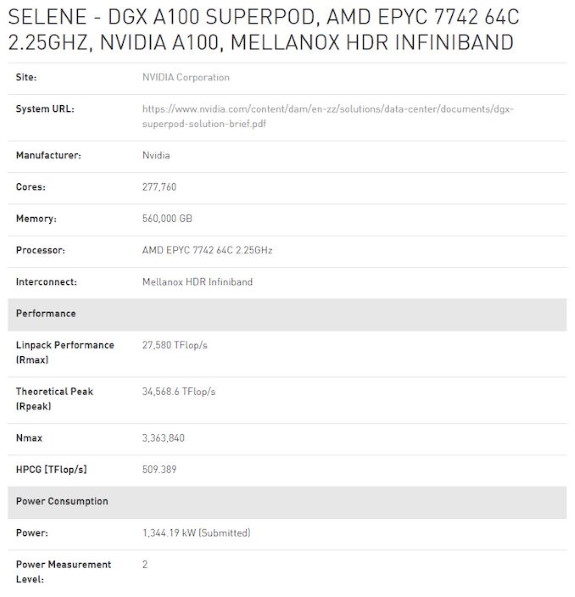