The GeForce RTX 3060 Ti is expected on December 2nd. Pricing is believed to be under $400.

NVIDIA is targetting RTX 2080 SUPER with the new model being faster by a few percent, according to the data we collected. There are a few differences between both SKUs and few similarities. The RTX 3060 Ti and RTX 2080 SUPER both feature 8GB GDDR6 memory, but the latter was the only Turing model to have 15.5 Gbps modules. Meanwhile, the RTX 3060 Ti will stick to 14 Gbps. The graphics card will also be a lot cheaper, expected to be under 400 USD, while the fastest SUPER GeForce from 2019 retailed at 699 USD. 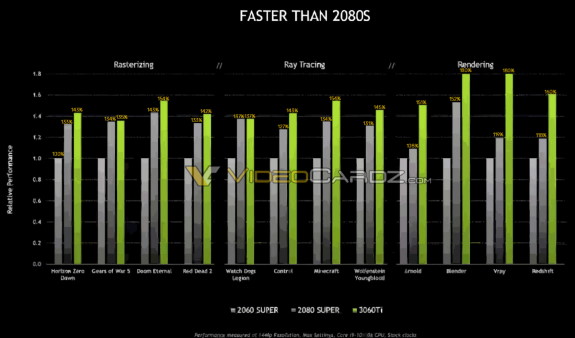