Posted on Tuesday, November 17 2020 @ 10:36 CET by Thomas De Maesschalck
Sharkoon has a new low-budget mid-tower ATX case with a tempered glass side panel and RGB LED lighting. Called the RGB Slider, this model has a MSRP of just 39.90EUR yet promises quite a lot of features.

Sharkoon Technologies is an international supplier of quality, high-performance PC components and peripherals. Sharkoon Technologies now presents the RGB Slider, a new midi ATX case with a compact format. The case has a minimalist and simple design, and despite its low price range, it still has special features such as a side panel made of tempered glass and a front panel with an integrated RGB LED strip.

Simple Yet Chic Design
Thanks to its black finish and simple form, the RGB Slider makes a straightforward and unobtrusive impression. For subtle visual variation, the matt black front panel contains an RGB LED strip that can be illuminated in 14 preset color modes via the built-in addressable RGB controller. The lighting of the RGB LED strip can be freely adjusted through compatible mainboards with a 5V-D-coded-G or 5V-D-G pin header and using software such as Asus Aura Sync, MSI Mystic Light Sync, Gigabyte Fusion and ASRock Polychrome SYNC. The integrated RGB controller also allows the connection of further RGB components.

Full View into the Case
The RGB Slider possesses a side panel made of tempered glass, located on the left side of the case. This enables a full view of the interior, and the installed hardware components let themselves be seen. The surface of the side panel remains free of visible screws, as the panel is rested into the frame and firmly attached from the rear of the case.

Range of Options for Fan Installation
In order to provide the case with an optimal airflow, the RGB Slider has various installation options for cooling fans. The 120 mm fan which is already pre-installed at the rear of the case can be supplemented with additional fans if required. Behind the front panel, there are locations for up to three 120 mm fans, and under the top panel there is space for two 120 mm or two 140 mm fans. For additionally cooling the installed storage drives, another 120 mm fan can be mounted directly above the power supply tunnel.

Designed for Plenty of Storage
Inside the RGB Slider, a variety of data storage drives will all find room at the same time. Up to three SSDs can be mounted on the mainboard tray or on top of the power supply tunnel. The tunnel itself contains an HDD/SSD cage, in which two 3.5” HDDs can be accommodated or, instead of these, further SSDs.

Takes on Large Components
Despite its compact dimensions, the interior of the RGB Slider is also suitable for an extensive hardware build. The small case presents the possibility of also installing larger examples of hardware. Thus, a CPU cooler can have a size of up to 15.7 cm while a graphics card with up 33.5 cm length will still have sufficient room available. 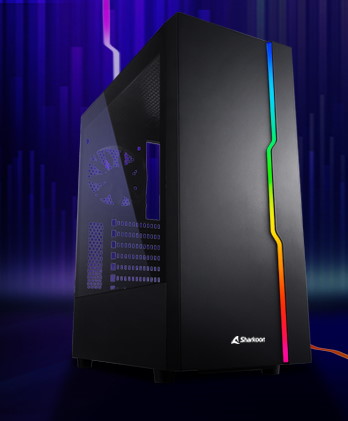