Posted on Friday, November 20 2020 @ 11:33 CET by Thomas De Maesschalck
Rumors about the SUPRIM X have been flying around for several weeks now. Today, MSI officially introduces its first GeForce RTX 30 SUPRIM X series video cards. The manufacturer offers SUPRIM X versions of the GeForce RTX 3070, RTX 3080 and RTX 3090. The latter two ship now while the 3070 model will follow in December.

The cards use the TRI FROZR 2S cooling solution and come with RGB LED light effects. This is a new high-end lineup from MSI, the SUPRIM X models have the fastest RTX 30 series clockspeeds MSI has to offer at this moment. The RTX 3090 SUPRIM X has a default Boost of 1860MHz and an Extreme Performance boost of 1875MHz, which is the fastest on the market. These cards are extremely fast for playing the upcoming Cyberpunk 2077 from CD Project RED, but also for playing light games like www.cancasinos.ca. The SUPRIM X cards definitely have a nice design. 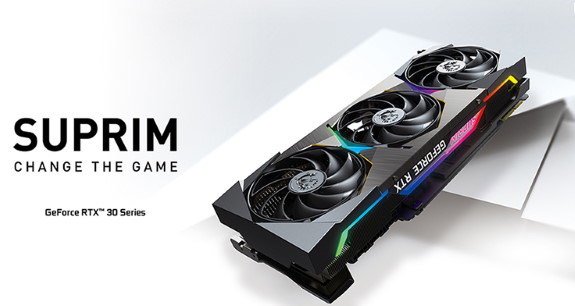 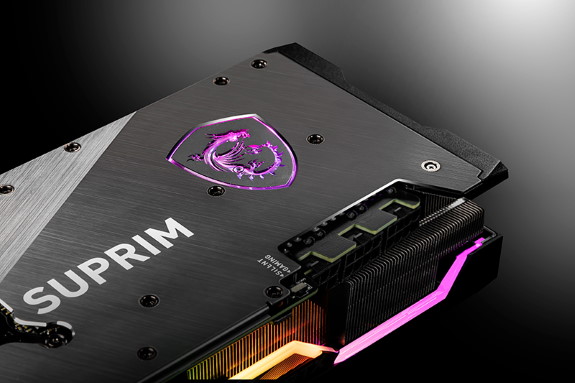 MSI proudly introduces SUPRIM, a new graphics card series and design built upon decades of circuit engineering and cooling development. A prestigious concept turns into reality with high quality materials and meticulous engineering that can be seen, felt, and experienced. A focus on the user experience is reflected in the details, with examples such as a dedicated heatsink for the memory modules and dual BIOS being set to Silent Mode out of the box.

At its foundation, the circuit board continues MSI’s legacy of high-performance design with hardened circuits, premium components, and an NVIDIA GeForce RTX 30 Series graphics processor that powers immersive gaming adventures and demanding content creation. The TRI FROZR 2S cooling system keeps temperatures in check to allow the graphics card to sustain tremendous performance. An extensive assembly of TORX FAN 4.0, Airflow Control fins, Core Pipes, and a base plate efficiently absorb and dissipate heat from critical components. The combination of TRI FROZR 2S’s high thermal transfer efficiency and silent optimizations in the fans and heatsink fins allow SUPRIM to be very quiet, if not silent, during operation.

Looking to the exterior, SUPRIM is clad in a modern aesthetic that reflects a high-performance lifestyle. Polished aluminum on the cooler enclosure and backplate impart a rigid menacing look and feel. Flowing RGB lighting can be customized with Dragon Center and Mystic Light to erupt in millions of colors and several dynamic effects.

Get more than just a graphics card with a bundled mousepad and support stand for additional reinforcement. Take the experience further with the Dragon Center software suite, with utilities such as Frozr AI Cooling that unifies system fans connected to a compatible MSI motherboard to react to changes in GPU thermal output. Take full control with Afterburner, the most recognized graphics card overclocking software utility in the world. SUPRIM changes the game as it arrives to retailers all around the world beginning November 20th.

Most models are available now so if you're lucky enough you may be able to get your hands on one. Of course, the GeForce RTX 30 series from NVIDIA has very limited availability as supply and demand are out of whack. As such, you may be stuck with your old card to play AAA titles like Cyberpunk 2077 or lighter stuff like online casinos usa. Hopefully, the RTX 30 series will be available in greater volume after the turn of the year.