Posted on Tuesday, November 24 2020 @ 13:20 CET by Thomas De Maesschalck
VideoCardz scored the first photos of the PowerColor Radeon RX 6800 Red Dragon. This model is expected to be introduced tomorrow. PowerColor's RX 6000 lineup will reportedly include three series; the high-end Red Devil, the mid-range Red Dragon and then also a nameless series that will have a cooling solution similar to the Red Dragon. The Red Devil series will also include a liquid cooled model as well as a Limited Edition card.

The Red Dragon card has a triple-fan cooling solution with a black shroud. Clockspeeds are unknown. It launches tomorrow but stock is expected to be very low, just as with the rest of the RX 6000 series from AMD or the RTX 30 lineup from NVIDIA.

The Red Dragon will drop the RGB aesthetics in favor of a simple black shroud, it will however, retain the triple-fan configuration. The cooler is a bit thicker than 2 slots and it clearly extends beyond the card’s length. The card is equipped with dual 8-pin power connectors and a non-standard display configuration. Unlike the reference design and PowerColor’s Red Devil, the Red Dragon does not have a USB Type-C connector. 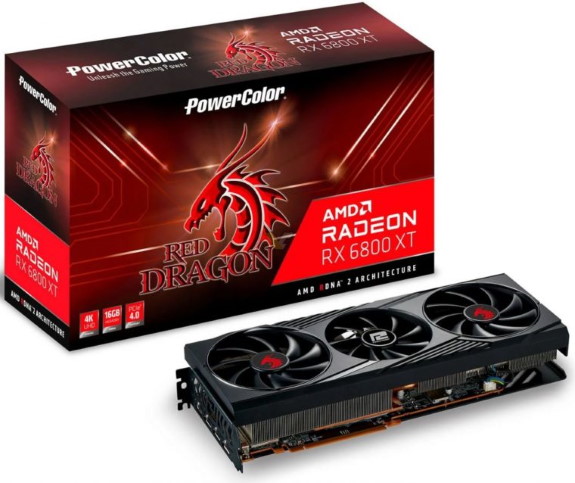