Posted on Tuesday, Dec 01 2020 @ 21:19 CET by Thomas De Maesschalck
The final GeForce RTX 3060 Ti series post of the day. Here are the details about MSI's new cards. The company has GAMING X TRIO, GAMING X, VENTUS 3X, and VENTUS 2X cards, all in stock and overclocked configurations. This results in a total of 8 SKUs. The GAMING X TRIO OC is the fastest version, it has a 1830MHz Boost.

GAMING TRIO Series
GAMING has been refreshed with a new look while maintaining the same great balance between performance, cooling, and low-noise that gamers have come to trust. Leading the updated product series is the new TORX Fan 4.0 design with pairs of fan blades bound together with an outer link, forming a rim that focuses airflow into the updated TRI FROZR 2 cooling system. Mystic Light adorns the exterior of the graphics card, illuminating color in synchrony with the rest of the PC through Mystic Light Sync and Ambient Link, all controlled with the Dragon Center software utility.

GAMING series
MSI brings GAMING to RTX 3060 Ti with the 8th generation of the iconic TWIN FROZR series too. The improved TWIN FROZR 8 design on the GeForce® RTX 3060 Ti GAMING X utilizes dual TORX 4.0 fans with pairs of fan blades bound together with an outer link, forming a rim that focuses airflow into the updated TWIN FROZR 8 cooling system. The heatsink features advanced aero- and thermodynamic technologies for efficient heat dissipation to keep the temperature low and performance high. The new look emphasizes the glorious glow of Mystic Light RGB infused into the card. Using the updated & improved MSI Mystic Light software, controlling and syncing your LED-lit components is easier than ever.

VENTUS Series
The popular VENTUS is revealed in GeForce RTX 3060 Ti as well, enhanced with well-known TORX Fan 3.0 and available in triple and dual fan variants. Whether it's for work or for play, VENTUS's performance-focused design maintains the essentials to accomplish any task at hand. A robust cooling system, reinforcing brushed-finish backplate, and rigid industrial aesthetic make this graphics card suitable for any build. 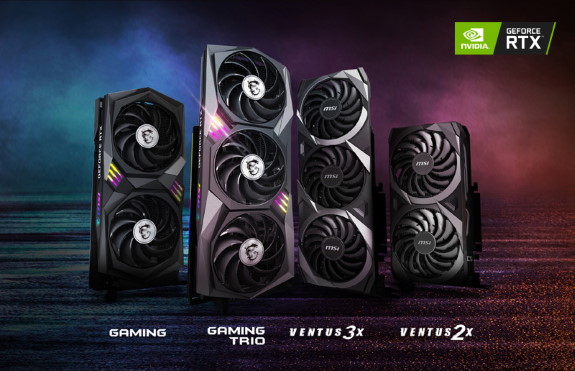