Vulkan ray tracing drivers and tools are out 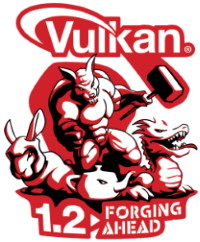 Following the publication of the final Vulkan ray tracing specification, the necessary developer tools and drivers are now publicly available. Both AMD and NVIDIA have released drivers with Vulkan ray tracing support and Intel will support it in 2021 with the Xe-HPG GPUs.

“Shipping API specifications was just the first step in building the developer ecosystem for Vulkan Ray Tracing, we now have tools and samples to truly enable developers to tap into the power of cross-platform ray tracing acceleration,” said Daniel Koch, senior graphics system software engineer at NVIDIA and Vulkan Ray Tracing TSG chair at Khronos. “One of the key requests from the developer community was the ability to easily bring DirectX 12 ray tracing (DXR) code to Vulkan. We have achieved that through delivering a carefully designed superset of DXR, and integrating Vulkan Ray Tracing support in the DXC open source HLSL compiler.”

As outlined earlier this year, production-ready use of HLSL in Vulkan has been achieved through integrating a SPIR-V backend into DXC, Microsoft’s open source HLSL compiler. Support for Vulkan Ray Tracing has now been integrated into DXC, enabling developers to use HLSL shaders in Vulkan ray tracing applications, including porting ray tracing applications to Vulkan from DXR. Vulkan is also used as a backend for layered implementations of APIs such as DirectX 12. Through the design of Vulkan Ray Tracing, projects such as vkd3d-Proton will be able to efficiently support layered DXR over Vulkan.

Production Vulkan drivers that include the Vulkan Ray Tracing extensions are now shipping for both AMD and NVIDIA GPUs, starting with the AMD Radeon Adrenalin 20.11.3 and NVIDIA R460 drivers for both GeForce and Quadro on Windows and Linux. The Vulkan Ray Tracing extensions will also be supported by Intel Xe-HPG GPUs, available in 2021, with driver support provided via regular driver updates.

On a side note, it's now possible to play the ray-traced version of Quake II on AMD GPUs. Previously, this game was exclusively playable on NVIDIA GeForce RTX GPUs.