Various new memory announcements from Intel today, most of them aimed at the server market. There are 144-layer NAND flash memory based products as well as second-generation Optane SSDs as well as DIMM versions. I'll briefly cover the consumer models, details about the server models can be found in the press release below.

First up, Intel has the SSD 670p, this is a new consumer SSD that uses 144-layer QLC NAND flash memory. The 670p uses a new controller but remains PCI Express 3.0 based. There will be 512GB, 1TB, and 2TB editions. Intel optimized the SLC cache system to ensure better performance in real-world usage for partially-filled disks. The SSD 670p will be out in Q1 2021.

Optane for the consumer market seems largely abandoned. Intel has various new models for the datacenter market but the only product for consumers is the Optane Memory H20, which is an M.2 PCI Express 3.0 card that combines 512GB or 1TB of 144-layer QLC NAND with 32GB of Optane memory. It's exclusively aimed at laptops and should be out in Q2 2021.

"Today is a key moment for our memory and storage journey. With the release of these new Optane products, we continue our innovation, strengthen our memory and storage portfolio, and enable our customers to better navigate the complexity of digital transformation. Optane products and technologies are becoming a mainstream element of business compute. And as a part of Intel, these leadership products are advancing our long-term growth priorities, including AI, 5G networking and the intelligent, autonomous edge." –Alper Ilkbahar, Intel vice president in the Data Platforms Group and general manager of the Intel Optane Group

Intel Optane persistent memory is attached to the CPU via the double-data rate bus, enabling direct load-and-store access at DRAM speeds; non-volatile, it combines the best elements of memory and storage.

The Optane SSD P5800X is pictured below. 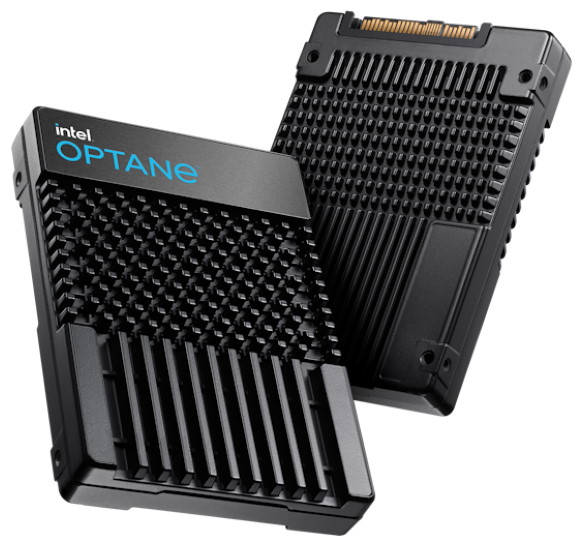