Posted on Monday, January 04 2021 @ 15:37 CET by Thomas De Maesschalck
Polish case maker SilentiumPC kicks off the new year with the Ventum VT4, a series that includes four variants. The base model starts at 51EUR and for 4EUR extra you can get a version with four fans instead of two. Next there's a version that features four ARGB LED fans for 69EUR and there's also a white version of the latter for 74EUR.

Optimised for outstanding airflow
The Ventum VT4 line-up offers exceptional air-flow, which has been achieved by incorporating mesh in the front and top of the chassis. In addition to that, even the interior layout has been optimized to further improve the flow of air from the front to the back and the top, depending on the user’s preference. While the Ventum VT4 TG base model comes with two pre-installed 120-mm case fans, the Ventum VT4V TG and the Ventum VT4V Evo TG ARGB (Black or White) are equipped with four case fans out of the box.

The interior was designed to house up to 8 case fans in total. They can be installed in the front, rear, top and on top of the PSU compartment. In addition to that, the Ventum VT4 series is compatible with a wide range of AIO liquid cooling systems with radiator sizes of up to 280. With the supplied splitter, users can easy connection and control the case fans and even the addressable RGB illumination in case of the EVO ARGB models.

Ventum VT4 TG
The base model is Ventum VT4 TG. It covers all above listed features and comes with a full-size tempered glass side-panel. Ventum VT4 TG is equipped with removable and easy to clean dust-filters in the top and bottom, underneath the power supply unit. This configuration comes with two pre-installed high-pressure Sigma HP 120 mm CF fans, rotating with maximum 1.200 RPM.

The Ventum VT4 series offers plenty of room for high-end components, supporting VGA card with a maximum length of 345 mm and CPU air coolers with up to 159 mm height. The lower compartment is designed to accommodate up to two 3,5” Hard Drives. Three 2,5” Solid State Drives can be mounted in the service area behind the mainboard.

Ventum VT4V TG
For even better air-flow, the Ventum VT4V TG is bundled with four instead of two high-pressure Sigma HP 120 mm CF fans. All features and advantages of the base model are covered by this “V”-variant.

Ventum VT4V EVO TG ARGB
The Ventum VT4V EVO TG ARGB is the top-of-the-line model of the Ventum VT4 series and comes in the two flavours black and white. Both versions are essentially identical except for the color. The bundle includes four of SilentiumPC’s new high-pressure Stella HP ARGB 120 mm CF case fans, rotating at max 1.200 rpm, providing superb airflow right out of the box. The fans are equipped with addressable RGB LEDs, allowing for amazing lighting effects and colour schemes. Users can use the supplied Nano-Reset ARGB controller to control the fans or the splitter for a total of five ARGB devices and five fans, making it possible to connect them to one socket in the controller or motherboard. The supported ARGB systems include ASRock Polychrome Sync, Asus Aura Sync and MSI Mystic Light.

Modern I/O panel
All the important ports and buttons are easily accessible in the top of the front-panel. The I/O panel includes two USB 3.2 Gen1 (3.0) ports, audio in and out ports, and a Power and Reset button. 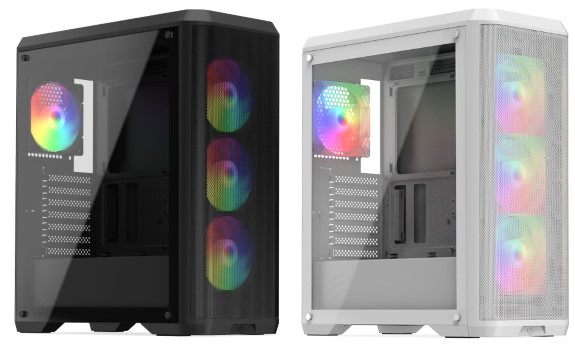