Posted on Friday, Jan 08 2021 @ 12:15 CET by Thomas De Maesschalck
Via a digital-only event on January 11th, ThermalTake will reveal its new TOUGHAIR processor coolers. The company came up with three models, they should be available in early February. There's a top-flow model and two tower models, one with a single fan and another with a dual-fan configuration:

120mm High Static Pressure Fans
Born from the same design concept as the TOUGHFAN12, the TOUGHAIR is equipped with high-quality PWM-controlled fans of up to 2000 RPM. The high air pressure and high airflow fans on the TOUGHAIR’s fans are also built with 2nd generation hydraulic bearings, LCP fan blades, and an anti-vibration mounting system. 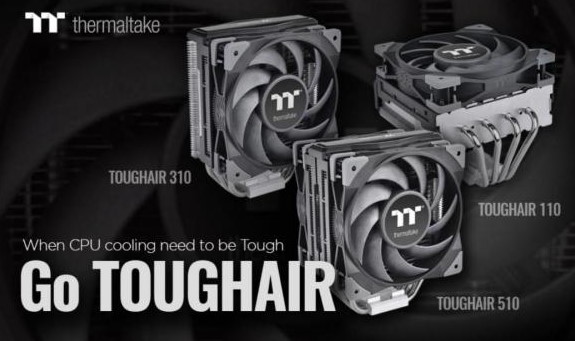