Posted on Friday, Jan 08 2021 @ 14:48 CET by Thomas De Maesschalck
Sometime in March we'll see the availability of Intel's 11th Gen Core "Rocket Lake-S" processors. A lot of existing 400-series motherboards will support the new models after the installation of a BIOS update, but there will also be a new 500-series chipset lineup. Motherboard makers will start showing off 500-series motherboard designs after Intel's announcement at next week's digital-only CES 2021 show.

In the meantime, VideoCardz already managed to get its hands on a photo of the Gigabyte Z590 AORUS Xtreme. This is an ultra-premium segment motherboard, the current Z490 version still costs around $600 so that gives you some sort of indication about the price range of the upcoming Z590 AORUS Xtreme. It will probably be higher.

The Z590 Aorus Xtreme motherboard features 20+1 digital power stages, which is more than the Z490 series which features 16+1. The motherboard is equipped with advanced networking such as 1x 10Gbe and 1×2.5 Gbe Ethernet ports, Thunderbolt 4, and Wifi 6E (a new standard that operates in a 6 GHz band). 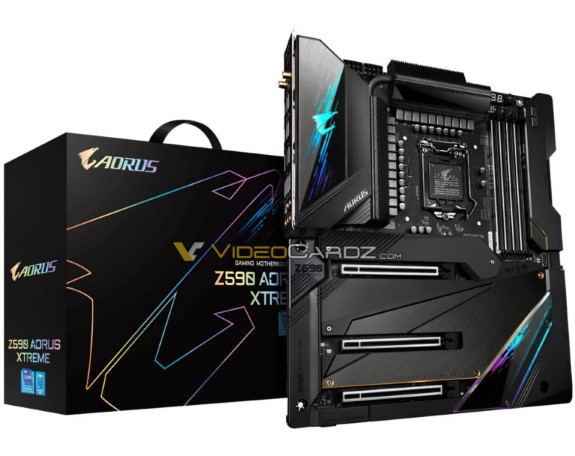