VideoCardz got its hands on a big slide deck that describes AMD's Cezanne architecture. This is the new architecture that's used for the Ryzen 5000 series laptop APUs. You can check it out over here. In the confidential slides, AMD claims its Ryzen 9 5900HX is up to 19 percent faster than Intel's Core i9-10980HK flagship CPU.

AMD has confirmed that Cezanne APU has a die size of 180mm2, a 15% increase over Renoir. The APU has 10.78 billion transistors, which is a 10% increase over its predecessor. In a new slide deck, the company lists all major improvements that come with the Zen3 based APU. A most important change alongside the upgraded new Zen3 core design is a doubled L3 Cache to 16MB, which is now shared among all CPU cores. The APU also supports LPDDR4 memory which is more common for ultra-thin laptop designs. 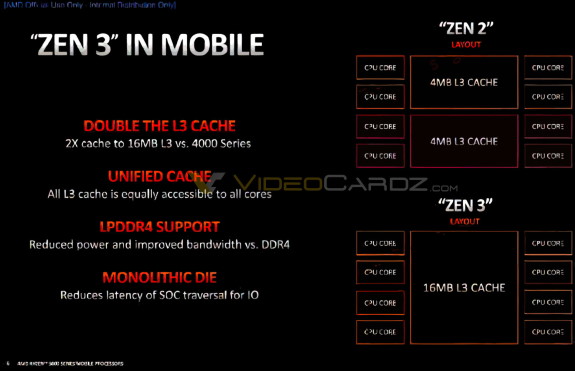