Posted on Thursday, Jan 28 2021 @ 15:14 CET by Thomas De Maesschalck
Corsair announces the MP600, a new line of PCI Express 4.0 M.2 NVMe SSDs. These disks promise read speeds of up to 7000MB/s and write speeds of up to 6550MB/s. There are several variants, you can choose between passively cooled models and a watercooled flagship, in capacities from 1TB to 4TB. Shipments will start soon, pricing starts at $154.99 for the MP600 CORE 1TB.

The MP600 CORE and MP600 PRO models are both equipped with a high surface area aluminum heatsink to effectively disperse heat and reduce throttling, maintaining the drive’s performance for years while adding a stylish accent to your motherboard. The MP600 PRO Hydro X Edition is the first CORSAIR M.2 SSD to include an integrated Hydro X Series XM2 Water Block, easily fitting into your custom cooling loop for top-of-the-line cooling and performance. The XM2 Water Block is also available separately, installing onto any M.2 SSD with a 2280 form-factor and integrating into your loop to reap the benefits of lower temperatures and virtually eliminating performance throttling. 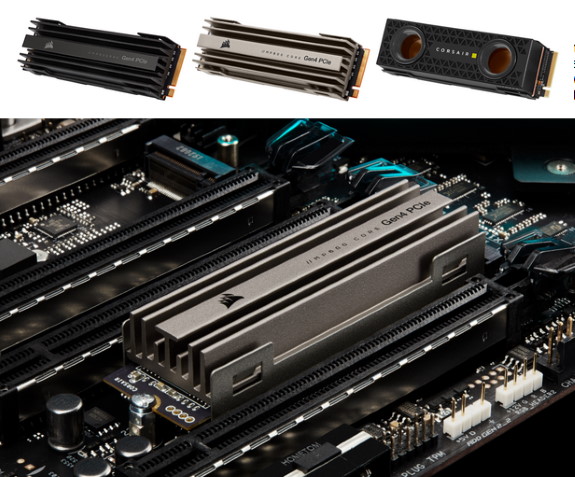