NVIDIA's GeForce RTX 3060 card launched on February 25th. Retailers aren't supposed to sell cards before this date but last week it emerged that some stores were already selling cards to miners for big bucks. Now VideoCardz reports that GeForce RTX 3060 cards are already selling via second-hand websites. The site says a lot of cards were sold already as distributors and retailers around the world have ignored NVIDIA's embargo.

The site received a tip about a listing of three Gigabyte GeForce RTX 3060 EAGLE OC video cards on the website of Belarusian second-hand market Onliner. A guy is trying to sell these cards for 2800 BYN a piece, which is about US$1080. VideoCardz speculates miners may be getting rid of GeForce RTX 3060 inventory because the cards are slower than expected.

As we wrote last week, the GeForce RTX 3060 has an anti-mining algorithm that roughly halves the hash rate when it detects Ethereum mining. This makes the 3060 less attractive for mining than existing cards. NVIDIA claims its anti-mining protection is not hackable because it's a "secure handshake" between the GPU, firmware, and driver. Still, we're wondering how long it will take until someone will figure out a software or hardware-based method to circumvent this limit.

The description says that one of the graphics cards was already unpacked for verification. One would guess that the verification was limited to checking mining performance. NVIDIA has announced that RTX 3060 will be the first graphics card that will feature a crypto-mining limiter, that will reduce the hash rate once the firmware detects the mining algorithm. Upon checking how slow the graphics card is, the seller might have decided to get rid of the graphics cards. However, there are reports that due to the high value of cryptocurrency, the RTX 3060 can still generate enough money to be considered profitable.

The official launch price of the GeForce RTX 3060 is $329. Due to shortages and the mining craze, it's expected that very few cards will sell anywhere near that price. 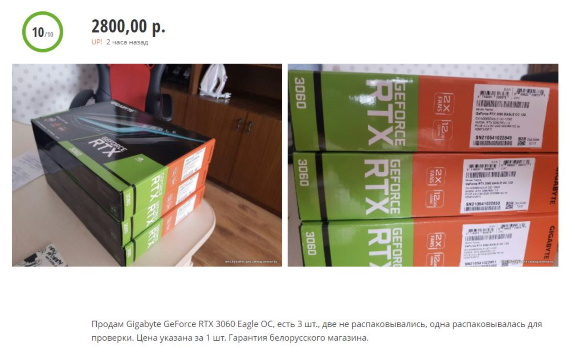