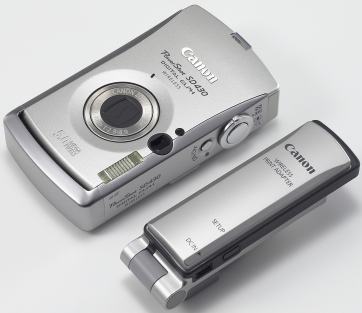 Canon today announced the new 5 megapixel PowerShot SD430 Digital ELPH Wireless digital camera which ships with a wireless adapter to beam your images to a printer without needing to mess around with cables.

Perhaps the best thing about this new digital camera is not just that it's wireless, but that it's so easy to use. All the user needs to do is connect the supplied Wireless Print Adapter to a Canon PictBridge printer, such as the new Canon SELPHY CP510 or CP710 models, and press the blue lit Print/Share button on the back of the camera. Seconds later, the image is sent wirelessly to the printer and a photo-lab quality print begins to emerge. How's that for a magic trick?

Consumers can also wirelessly download images from this 5.0 megapixel, 3X optical zoom digital camera to a compatible personal computer, or even operate the camera remotely from as far away as 100 feet - pretty neat if you're a parent trying to capture a nice candid portrait of a son, daughter or significant other when they're not looking. The SD430 digital camera is also sure to be a hit at parties where friends will be amazed as images are automatically transferred wirelessly from the camera to a computer display while the party is still in full swing. A straightforward user interface on the SD430 Digital ELPH makes using all the wireless features on this digital camera a snap.

Since the Wireless Print Adapter WA-1N included with the SD430 Digital ELPH is pre-registered on the camera as a connecting device, wireless printing requires no initial setup. All the user needs to do is connect the adapter to a current Canon SELPHY or PIXMA PictBridge printer and they're ready to go. Once they select the image they want from the back of the camera, one more press of the Print/Share button is all it takes to print wirelessly. When the print is finished, they just pop the image into a frame and they have a great gift with only minimal effort.

Using the IEEE802.11b Wi-Fi standard, the SD430 digital camera can transmit a 5.0 megapixel image file to a compatible Canon SELPHY or PIXMA Photo Printer at high speed in approximately six seconds. With wireless direct printing using the SD430 digital camera, consumers are freed from the trouble of connecting their camera to a printer with a USB cable each time they want to print.

Images captured with the PowerShot SD430 digital camera can also be transferred wirelessly to a PC equipped with a wireless LAN card or a wireless access point device such as a router. When the camera is set for Auto Transfer, all the user needs to do is take a picture. Within seconds, the resulting image appears on the computer monitor at full screen magnification. When Auto Transfer is shut off, images are transferred wirelessly to the PC using the camera's Print/Share button. Users can even print their images wirelessly via the computer by camera operation alone.

The Canon PowerShot SD430 Digital ELPH Wireless digital camera is scheduled to be available in the U.S. by the end of January 2006 at an estimated selling price of $499.99.