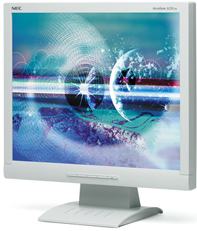 The four new NEC touch-enabled displays use the 15" AccuSync LCD52V and the 17" AccuSync LCD72V monitors with a choice of either capacitive or resistive touch screen technology to deliver interactive touch capabilities to markets such as retail point-of-sale, entertainment, hospitality, kiosks, medical, industrial, education and transportation.

NEC's new capacitive-enabled AccuSync monitors are ideal for applications that require fast, reliable and accurate touch performance. This high level of performance is achieved through the use of 3M's ClearTek capacitive touch screens which have the added benefit of increased durability by resisting scratches, abrasions and everyday contaminants such as dirt, liquids and harsh chemicals. The new resistive-enabled AccuSync monitors incorporate 3M's MicroTouch resistive touch screen technology and offers, economical and enhanced input flexibility by being capable of responding to multiple input stimuli, including a finger, gloved hand or pen stylus.