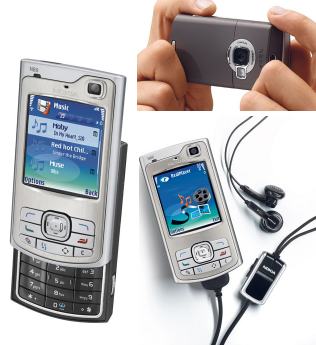 Nokia today presented the Nokia N80 3G phone, claiming it is the first handset ever to enable seamless home media networking between compatible TVs, audio systems and PCs. The N80 weighs only 134 grams and is feature packed, providing fast Internet access as well as the possibility to send and receive emails at Wireless LAN speeds.

One of the new features of this phone is UPnP (Universal Plug and Play) technology which can be used to tap the N80 into the digital networking, acting almost as a remote control. Nokia explains the N80 enables a secure and convenient access to compatible PCs, audio equipment and TVs. Consequently, images and video stored on the Nokia N80 or a compatible PC can be viewed wirelessly on the living room TV, while listening to music stored on the device through the living room audio system. Printing is now faster too, as Nokia N80 users can print wirelessly to any compatible UPnP-enabled home printer or printing kiosk.

The Nokia N80 features 3GB, WLAN, EDGE and four GSM bands to enable broadband access from virtually anywhere on the planet. The phone features Nokia's new web browser and mini map and it has a 352 x 416 pixels display that features up to 262,144 colors.

It has 40MB internal memory, which can be expanded with miniSD memory cards of up to 2GB. Availability is planned in the first quarter of 2006 for about 500EUR.