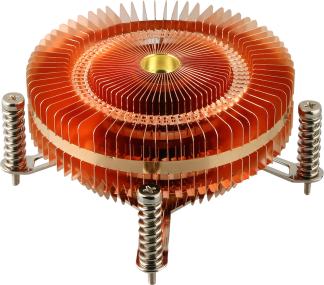 Sharkoon has presented the Copper Twister CPU Cooler, a pure copper heatsink with active cooling for Intel P4 and AMD K8 processors with a suggested retail price of 29EUR.

Following the Red Shock, Sharkoon is introducing another high-performance CPU cooler. The Sharkoon Copper Twister is a pure copper active cooler for Intel P4 sockets (478 and 775) as well as AMD K8 (754, 993, 940). The heatsink consists of a ring of copper fins arranged in a sunburst pattern. The 360 degree cooling also benefits other components near the socket, such as transformers.

The active part is played by a 92 mm fan made of transparent plastic. The low noise fan works at a nominal voltage of 6 to 13.8 V and a power consumption of between 0.6 and 3.1 Watts. It rotates with 1200 to 3400 rpm moving an airflow of between 41.39 and 117.26 cu. m per hour at a noise level of 29 dB. The fan features a 4-pin PWM connector so that mainboards equipped with a corresponding controller can regulate the fan speed automatically by pulse width modulation. Using PWM, the voltage is delivered in impulses, allowing precise control as well as a pleasantly low noise level.

The Sharkoon Copper Twister's heatsink measures 90 x 90 x 42 mm (w x h x d) and weighs 300 g. A retention module is used for attachment to the mainboard. Along with the heatsink and fan, a user's guide and materials needed for mounting, including thermal compound, are included in delivery.