AMD's plans for the future 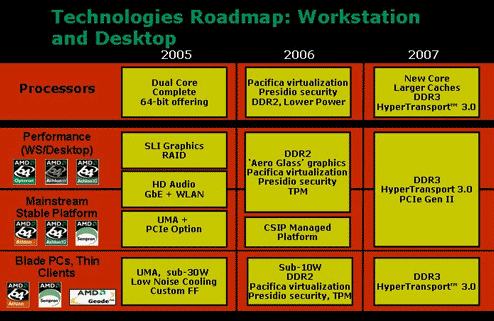 AMD presented its plans for the future at its annual Technology Analyst Day. This year the company managed to grab a few percent of Intel's marketshare and the company aims to expand this to the coming years.

AMD will target mainly at the business sector next year, by focusing the marketing on the low power consumption of its processors compared to Intel processors.

Soon AMD will launch a new page on their website were companies will be able to calculate how much power they will save by using AMD Athlon 64 or Opteron processors instead of Intel Pentium 4 or Xeon processors.

By opening Fab 36 in Germany the company has now more 90nm production capacity and it will switch the fab gradually to 65nm, starting in the second half of 2006. And within three years they want to start production of 45nm processors.

Not much is known about AMD's production plans for the future but the company will keep use SOI and strained silicon. AMD is also working on new features to lower power consumption like sleep transistors and the possibility to turn off certain parts of a processor's core. And in future it will be able to control the clockspeed and voltage of each individual processor core to safe even more power.

AMD also aims to become a leader in quad-core processors and wants to get a bigger foothold in the notebook market.

Source Tweakers.net, you can check out all the slides over here.