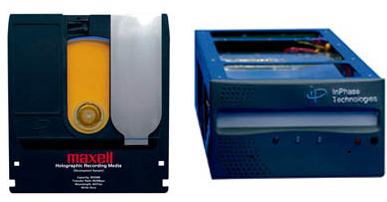 I already reported about this last week but today I found a bit more information and a photo of Maxell and InPhase's upcoming holographic disc.

InPhase claims its disc have a data achieve life of over 50 years, which is comparable to the longevity claimed by most other optical media makers.

InPhase isn't the only company promoting holographic storage. Japan's Optware - which in July won $14m in funding from four companies, one of which was Toshiba; it also has backing from Intel Capital - is working on a DVD-sized holographic disc is says will hold more than 1TB of data with a throughput of 1Gbps.

The format is dubbed HVD - Holographic Versatile Disc - and Optware is already pushing a 200GB HVD-RW disc type through the HVD Alliance, an organisation supported by Optware, Fuji Photo and half-a-dozen or so Japanese chemicals companies.