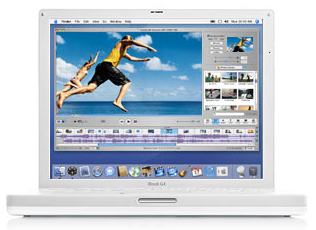 The new iBook 13.3-inch widescreen will feature about 15 percent more pixels than the previous model with its 1280 x 720 pixels (WXGA) resolution.

Sources also note that the 12.1-inch model will continue to live on in iBook form factor, but that its days are numbered as a PowerBook configuration. The 12-inch PowerBook was hardly touched with Apple's October revision, seeing only a price drop on the SuperDrive model and the elimination of the Combo drive version.

The site also reports Apple delivered Mac OS X 10.4.4 to developers on Friday and that Plaxo has released a beta of its Mac OS X client to a select group of users.

Plaxo offers users a dynamic address book that they can access from anywhere, as well contacts, calendars, tasks, and notes they can view on the Web.

The company is expected to make an announcement of the Mac version in the near future, along with a public beta.